After Monday’s marijuana discussion, the council listens to Councilor Bessie Johnson, far right, on another topic.

Albany’s proposed one-year ban on medical marijuana dispensaries is once again up in the air. The apparent reason: Councilor Bill Coburn (in the red shirt in the shot above) does not want to force Canna Kitchen out of business. A decision may be made at the city council’s regular meeting, which starts at 7:15 Wednesday night, April 9, at City Hall.

On March 19, four councilors including Coburn said they favored an ordinance that would impose a moratorium until May 1, 2015, on allowing any of the dispensaries otherwise allowed and registered by the state. But Coburn also made it plain he did not want to harm Canna Kitchen, a 2-year-old operation that transforms marijuana plant material into other forms — including capsules, ointments and tinctures — for holders of state medical marijuana cards. The business is on Ferry Street in an industrial zone. It does not consider itself a dispensary, but state authorities disagree, sand it applied for registration.

The ban is scheduled to come up for a second reading and a vote on Wednesday night, and the council discussed the issue at Monday’s work session with Sean Kidd, the assistant city attorney. According to the back and forth between councilors, the lawyer and City Manager Wes Hare, the city would not be allowed to make an exception, based on zoning or anything else, if it enacted a ban. 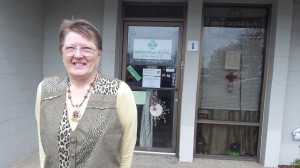 But if a ban is not enacted, the city could enact “reasonable regulations” on dispensaries either now or any time. Monday’s discussion pointed to a possible outcome: The straight ban would be defeated with Coburn voting against it and Mayor Sharon Konopa siding with the opponents, as she has signaled she might. The council then could enact — immediately if the mayor has her way — regulations that would ban dispensaries within 300 feet of residential zones but allow them in industrial zones. That would allow Canna Kitchen to continue.

What else the regulation ordinance would say about other zones or other rules was not immediately clear. State law does not allow dispensaries in residential zones or within 1,000 feet of schools or each other.

President Janet Steele of the Albany Area Chamber of Commerce appeared before the council Monday with a letter saying her board of directors unanimously backed the one-year ban. “There are several communities in the region where those with a legal medical marijuana card will be able to purchase what they need,” she said. “We see no reason for Albany to be one of the first to allow dispensaries.”

A few medical-marijuana advocates were in the audience, but the council took no further testimony after hearing more than 90 minutes of it last month.

I asked Coburn about his stand after the meeting. He would not commit himself but said he had made his view on Canna Kitchen clear — he did not want it banned — two weeks ago. (hh)