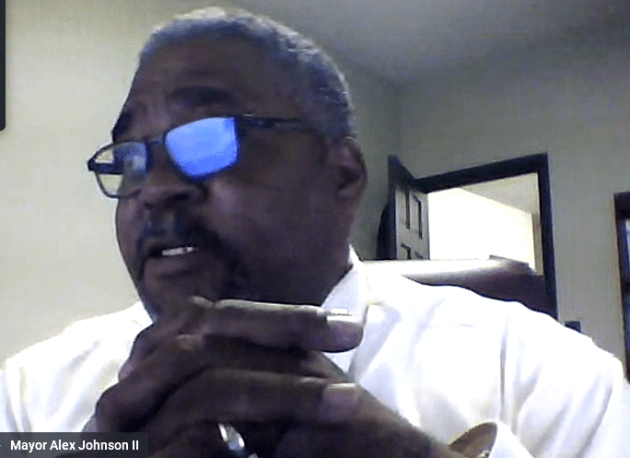 There was only one unexpected development when the Albany City Council, with three new members, held its first meeting of the year Monday afternoon. And I missed getting a picture of it.

The afternoon meeting took about 40 minutes. Mayor Alex Johnson II, who took office Jan. 1, read a two-page message to Albany residents. Among other things, he said the city must work on housing affordability and helping business develop jobs.

And, he said, “I can assure you that each member of the City Council is committed to ensuring Albany continues to be a safe and welcoming community for all who chose or will choose to call Albany home.”

The message is worth reading. You can see it here.

Johnson as mayor and newly elected Councilors Matilda Novak, Ray Kopczynski and Marilyn Smith were sworn in earlier, and the council watched videos of both ceremonies, which took place in the council chamber. Manager Peter Troedsson explained that as required inside City Hall,  they all wore masks but Novak, standing about 10 feet away from anyone else, took hers off just to recite her oath.

Novak took part in the Monday session by phone from the coast. The others were on camera from their homes or offices during the online meeting.

One of the first tasks of the new council is to elect someone to succeed Johnson as councilor from Ward 2. Members agreed to do so on Jan. 26. The deadline for candidates to apply is Jan. 19. Applicants must be at least 18 and residents of Albany for at least one year and of Ward 2 at least 90 days.

(Former Mayor Sharon Konopa announced on Facebook Monday that she will seek the council appointment in Ward 2.)

Kopczynski held up a cartoon of a duck on crutches, a “lame duck.” He pledged he will not seek re-election when his term is up in four years. He did the same thing six years ago, served a four-year term, then sat on the sidelines for two years before running again in 2020.

I would have liked to get a photo of the duck, but the Chromebook procedure for taking a screenshot took too long. (hh)

The story has been edited to include Sharon Konopa’s announcement that she’ll seek the appointment to succeed Johnson in the Ward 2 council position.