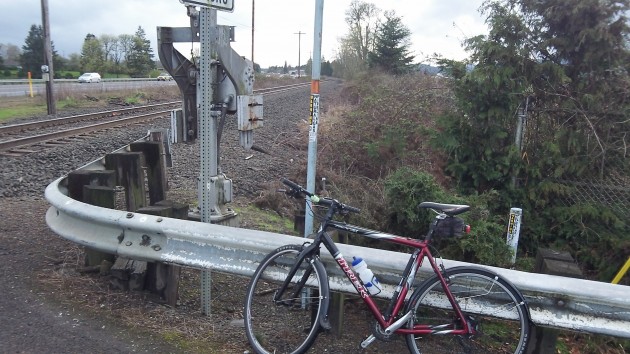 The path would cross Independence Highway somewhere near here.

Good news on the bicycling front: The proposed cycling and walking path between Albany and Corvallis has finally moved from being a mere dream to the realm of the possible. I’ve written about that trail for 10 years or more and hoped I might be able to use it some day. Now it’s possible it could be built in my lifetime.

Benton County and Albany transportation officials have been working on the planning for a long time, and a short section of the path in Corvallis is already done. The rest of the path will roughly follow the Union Pacific/Portland & Western rail line. It will make bike travel between Albany and Corvallis much easier and safer. The idea is to allow cyclists to avoid the narrow shoulders of Highway 20, used by 17,000-20,000 motor vehicles a day, many of them going at freeway speeds. (The commuting distance is upwards of 10 miles, depending on where you start and where you’re going. The distance between city limits is only 6 miles.)

Benton County reports it is negotiating with property owners and has asked ODOT for more time, till this fall, to acquire the necessary right of way. The county is meeting with some concerns from farmers worried about the trail’s impact on their operations.

Benton County also has applied under the state’s Connect Oregon program for $4.8 million to construct the trail from Manchester Street in Corvallis to Scenic Drive in North Albany. Getting the money is a long shot, but ODOT’s bike and pedestrian advisory committee ranked the trail as the sixth priority out of 36 projects when it met in Corvallis this month.

That’s “pretty good,” ODOT bike program manager Sheila Lyons says. A fairly high ranking should put the project in a good position for the next round even if it does not get funded this time under “Connect Oregon V.”

Meanwhile, on the Albany end, the section from Scenic Drive to Spring Hill Drive has been included in the draft of ODOT’s State Transportation Improvement Program or STIP for 2015-18. The STIP foresees the Albany segment costing about $2.4 million, and the plan has construction starting in 2017.

The schedule may not be met, but if construction does start three years from now, we might hope that the path is finished in five. That means I might be able to ride that trail before I die, assuming I last till I’m 75. (hh)