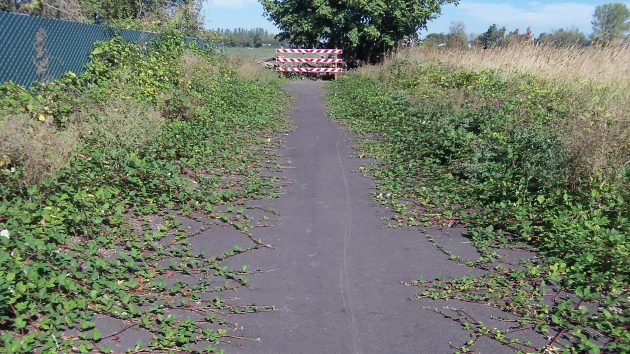 The Albany-Corvallis path has been stalled since this leg in Corvallis was built. (File photo, 2014)

There’s some doubt whether the long-proposed Albany-Corvallis bike path will ever be built, but Benton County is pedaling on with the idea, so far at least. The next step is a public meeting to hear a report from consultants on phase 1 of their work and “discuss alternative routes.”

Yielding to objections by farmers, the Benton County Planning Commission in February 2015 ruled against a plan to route the path along the Albany-Corvallis railroad line, and the county had to turn back a $2 million state grant toward its construction. Since then the county commissioned a survey that showed the path would get significant use. And this March the county board voted 2-1 to hire consultants Barney and Worth, of Portland, to explore alternative routes and talk to property owners.

The agreement with the consultants called for a three-phase process. Whether it goes past the first phase, concluding with the public meeting, the commissioners will have to decide.

I asked Public Works Director Josh Wheeler whether the consultants were able to identify any alternative routes acceptable to property owners, or whether that proved impossible.

“Conversations with property owners were to see if they would be engaged in a process that review(s) and analyzes possible routes,” he replied by email. “These conversations were mostly positive. If we proceed to Phase 2, that is where all alternatives will be on the board for review and discussion.”

Note the “if” in Wheeler’s response. The answer is up to the three-member county board. The project lost its main proponent when Commissioner Linda Modrell retired at the end of 2014. It lost another one when Commissioner Jay Dixon failed in his re-election bid this year, leaving Commissioner Annabelle Jaramillo. She and Commissioner Anne Schuster, who voted against going ahead last spring, will be joined in January by Xan Augerot, who may have the deciding vote. (All the commissioners are Democrats, of course, in case anyone forgot we’re talking about Benton County.)

The first phase of the Barney and Worth consulting contract was estimated to cost the county $45,000. All three phases together would cost an estimated $150,000, with the state contributing $50,000, but the county reserved the right to call a halt and drop the whole thing after phases 1 or 2. (hh)


9 responses to “Albany-Corvallis path: Pedaling on?”