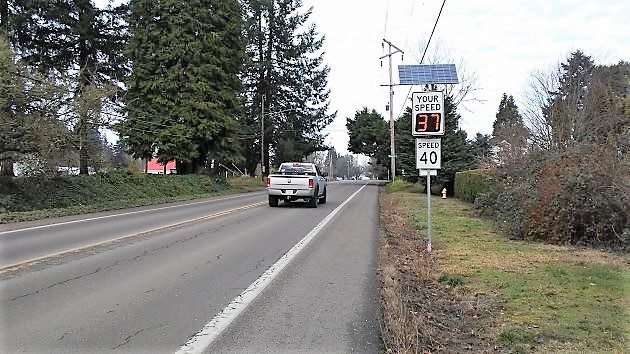 This is one of two radar speed displays Benton County installed on Spring Hill Drive in the fall of 2016.

Should Albany install radar-operated signs that tell drivers how fast they are going, especially if they’re breaking the speed limit? The city council plans to consider the question Monday.

In response to city and neighborhood complaints about speeding through a 40-mph section, Benton County set up two such displays on Spring Hill Drive in North Albany in 2016. Since then city staff members have been examining the pros and cons of doing the same on city streets where speeding is thought to be a problem.

The staff memo on this lists various downsides. Among them, the cost of installation and maintenance, vandalism, theft of solar panels if the signs are so equipped, and the possibility that drivers get so used to the displays that the signs lose their effectiveness in slowing traffic down.

One option studied: Temporary radar speed signs. But these would require concrete bases just like permanent ones, so would be just as costly to put up. Officials also worry that once a few signs go up, every neighborhood will want some.

The staff report with more details is part of the agenda for the council work session that starts at 4 p.m. Monday at City Hall. You can read it here.

My own observation: Most drivers usually go as fast as they think is safe and conditions allow, and lots of times that’s a little faster than the posted limit, which almost always is unnecessarily low. Maybe we ought to consider setting realistic speed limits without worrying too much about radar signs. (hh)