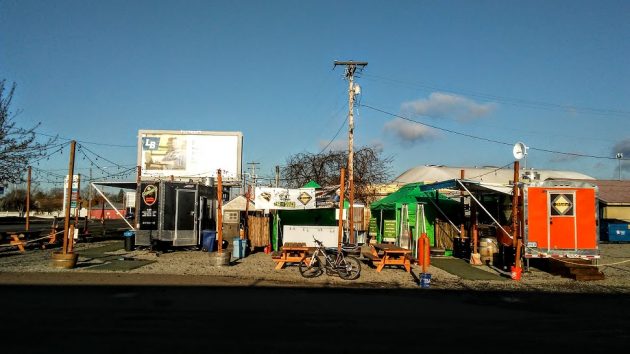 Food trucks on Pacific Boulevard near Queen Avenue on Dec. 1, 2020.

You call them food trucks. But the official designation seems to be “mobile food units.” And the city of Albany is fixing to regulate these units in a different way.

At a work session Monday, the city council went over a proposed food truck ordinance. The discussion made it plain that the draft law is not yet ready for council action.

According to Code Compliance Officer Kristopher Schendel, there are 18 food trucks in Albany, some arranged in pods and others sitting by themselves on vacant lots. Three more are expected to start up within a month.

Schendel’s memo to the council said the growth of this business has led to “multiple issues such as impacts to the visual landscape and previous land use approvals, violations of the development code, long wait times for permit processing, and a sense of unclear standards and requirements by many mobile food unit operators.” Another issue is the time city employees spend on food trucks.

The proposed law is intended to lessen those effects “while also allowing mobile food units to begin operating more quickly and efficiently.”

The council heard from a handful of food truck business owners and from Leah Tucker of the Oregon Mobile Food Association. The gist was that the council should consider their contributions to the economy and charitable causes, and not to discriminate against their businesses in order to shield traditional restaurants from competition.

Schendel’s draft would bar food trucks from having “amenities” such as tables, chairs, heaters or lighting, and outside storage units would not be allowed. The operators said they needed storage units for some of their supplies. One mentioned milk.

They also said outside lights were a matter of safety.

The mobile units could operate in Albany for two consecutive days without a permit. Beyond that, a city permit would be required, and it could be renewed annually for ever.

The draft law would require ADA-compliant restrooms on an “accessible route” within 300 feet of any food truck, but they could not be portable privies. I didn’t hear any discussion of that.

Without mentioning any particular provision, Councilwoman Matilda Novak said at one point she wanted it to be as easy as possible for food trucks to be in business in Albany.

Schendel said he would do more work on the draft. There was no word on when a food truck law would come before the council again.(hh)