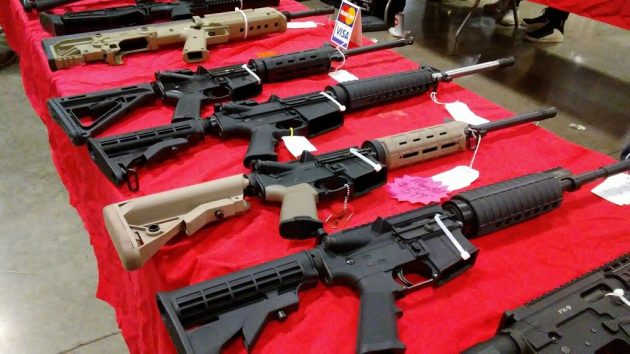 Rifles for sale at an Albany gun show last March.

The Albany City Council voted Wednesday to “look into” some kind of local legislation to protect lawful gun owners from further state-imposed restrictions that infringe on their Second Amendment right to bear arms.

Councilman Mike Sykes brought it up. He noted moves in the legislature to pass new laws affecting gun owners, and he wants Albany to consider becoming a “Second Amendment sanctuary.”

Sykes said he wanted City Attorney Sean Kidd to look into this possibility. The council voted 5-1 to direct the attorney to do so. Councilman Dick Olsen voted no.

The 2020 legislature is considering two gun bills favored by the Democratic majority. House Bill 4005 would set up a series of requirements for storing firearms and would hold the owner liable if a gun, not securely stored, is stolen and used in a crime. Senate Bill 1538 would allow local governments and schools to ban holders of concealed handgun licenses from being armed in their buildings, and violations would be punishable by up to five years in prison. Sen. Sara Gelser, whose district includes Albany, is a cosponsor. After initial hearings, both bills were sent to the respective Rules committees.

There’s also a proposed initiative that would outlaw a number of common rifles (such as those in the photo above) as “assault weapons.”

In 2015, several  Oregon cities and counties including Linn County adopted resolutions opposing any gun restrictions they consider to be violations of the U.S. and Oregon constitutions.

Linn County’s measure, signed by all three commissioners in June that year, says the county opposes any state or federal law that abridges the people’s right to keep and bear arms. And it says the county “is unable to expend any county resources for the implementation of Senate Bill 941.”

That bill, which became law, expanded the requirement for background checks to private transfers of firearms. The law has been in effect for four years, but if anyone locally has been convicted of violating it, it hasn’t come to public attention.

We’ll have to wait and see what if anything the city attorney’s office comes up with in response to the council’s wish. (hh)