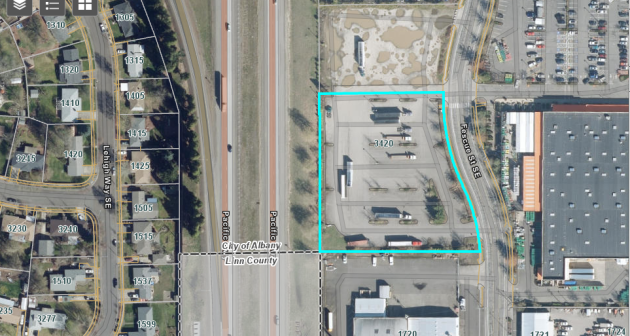 The city’s public notice included this map of where the Albany Hyundai dealership is planned, across Fescue Street from Home Depot.

A Texas automobile dealer intends to open a new Albany store, according to a filing with the Albany Community Development Department.

A Portland architect filed a site plan for review with the city for a 2.3-acre site at 3420 Spicer Road S.E.

While the address is on Spicer, the property actually lies on Fescue Street, between Home Depot on the east and Interstate 5 on the west.

The property is owned by Jackson Automotive Real Estate Holdings LLC of Rockwall, Texas, which bought the parcel last November for $1,250,000.

“Jackson Hyundai of Albany” is the name of the project as listed on the architect’s plan, which calls for a two-story showroom and service building surrounded by landscaping and parking.

I had heard of the owner, Steve Jackson, in January 2018, when I reported that he had purchased the former Mark Thomas Motors dealership on Santiam Highway, selling Dodges, Jeeps and other makes.

Plans for the store on Fescue show plenty of parking slots: 115 for inventory, 25 for customers, 16 for employees, and eight for the service department.

Approving the site plan is up to the community development director. Neighboring owners within 300 feet of the site were notified, the planning division said, and have until Aug. 31 to file comments if any.

This is an interesting time to start a car store. Oregon state officials announced this week they plan to follow the example of California, which intends to allow the sale of only “zero-emission” vehicles starting in 2035.

According to its website, Hyundai makes several hybrid, all-electric or fuel-cell-powered models. One all-electric model is shown starting at $39,950, with a range of 300 miles.

Getting a site plan approved is only an early step in starting a car dealership or any other big store. After the plan is approved, the next step is to file for a permit to build. (hh)


7 responses to “Albany car store planned east of I-5”