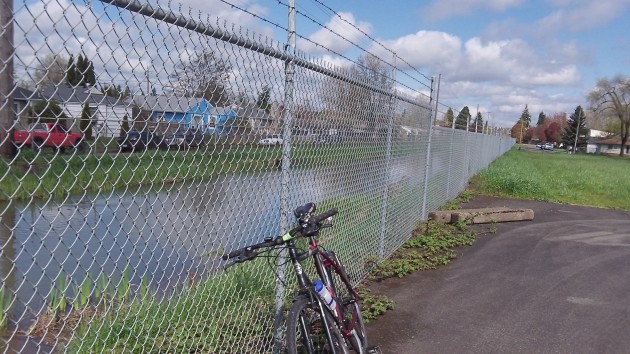 Chain link and barbed wire: Not quite the ambience a town would want.

Every time I see this fence on the Albany-Santiam Canal, I’m reminded of the Town Center Plan the city council adopted in 1995. The barbed wire is a sign of one of the unfulfilled hopes that the plan contained.

Now almost 20 years old, the Town Center Plan had been the outgrowth of the Central Albany Land Use and Transportation Study. And it laid the groundwork for the urban renewal program the city enacted six years later. One of the ideas of all this planning was to capitalize on the waterways running through the middle of town, the Santiam, the Eighth Avenue and the Thurston Street canals. The idea was to make them attractive by lining them with walking and bike paths. Together with the Dave Clark Path along the Willamette River, they would make a complete loop through the historic districts of the old town.

From cycling perspective the idea was sadly unworkable. Cyclists could not use such a path without stopping at a street crossing every single block, so if they wanted to get anywhere they’d be better off using the streets.

As for walking, though, it was a nice idea. The Town Center Plan called for the public, meaning the city, to design and build these canal paths. But nothing was done. Public Works objected to unfencing the Santiam Canal on safety grounds, among other reasons. And adjoining properties in some cases butt up against the canal itself, so buying land for the paths likely would have proved expensive and controversial. 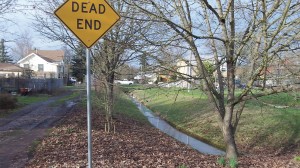 The Thurston Street canal had been transformed into a narrow ditch in the 1970s, and no one has ever made a move to undo that change. Also about that time, part of the Eighth Avenue Canal was paved over to create parking for St. Mary’s Church. That alteration, too, would be difficult to reverse.

The city’s urban renewal plan still includes mention of the canal pathways. But the fact that the project is called the “canal esplanade” makes it pretty much a dead issue. A public that rebelled over spending money on a street “promenade” would go nuts over an “esplanade.”

Still, taking advantage of waterways as urban assets rather than features to be fenced with barbed wire would likely enhance the appearance and eventually the economic vitality of the old part of town. So it’s too bad it hasn’t been done. (hh)