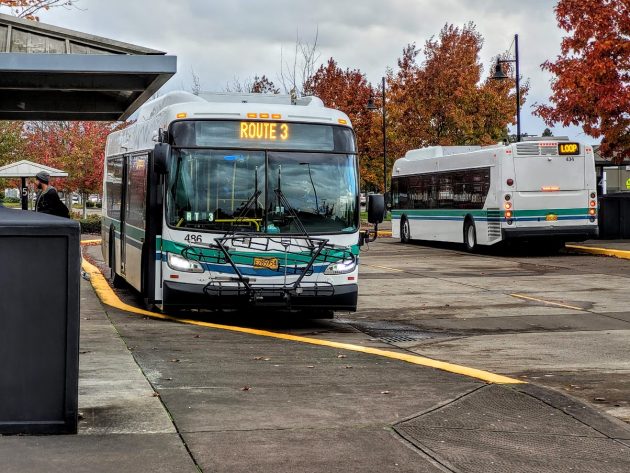 The Route 3 bus of ATS stops at Albany Station at 5:19 on Tuesday night.

Albany’s city bus system is poised to double in the number of buses and routes. But the hours of operations will remain the same, 6:30 a.m. to about 7 p.m. Monday through Friday. No buses on Saturday or Sunday.

Transit Manager Barry Hoffman gave the city council a rundown of the changes on Monday. New routes and schedules are expected to begin this coming winter, but steps still have to be taken before a date can be set.

Bus stops still have to be moved or built, for one thing. Drivers have to be hired and shifts arranged, for another.

With grant money, the city has bought two 35-foot New Flyer buses for a total of a little more than $1 million.

Since the 1980s, the Albany Transit System has operated two main circular routes. After the change there will be four on which buses will go back and forth.

Instead of two buses in daily operation, there will be four. They will log 48 hours of service per day, up from 20 now. This will require the full-time equivalent of 5.5 drivers, up from 2.5.

But the council won’t have to worry about it. The entire operation is funded by grants from the Federal Transit Administration and the Statewide Transportation Improvement Fund, which is fed by the 0.1 percent Oregon payroll tax enacted by the legislature in 2017.

Passengers won’t have to worry about it either. As long as the pandemic lasts, rides on the ATS buses are free. Before they were free, they cost a dollar for adults, 50 cents for seniors, and nothing for kids under 6.

How many riders are there? Hoffman didn’t say except to report that the number has plummeted during the pandemic. Before then, he said, the system’s cost was about $5 per ride. (The city’s 2020 comprehensive annual financial report showed about $34,000 in fare revenue. If each passenger paid a buck, you can see how many there would have been.)

Hoffman showed the council a map of the new routes, but I couldn’t read them. Among the changes he mentioned: The North Albany bus will turn around at the park-and-ride off Hickory Street and will no longer go up Gibson Hill to Fire Station 14. A route on Waverly Drive will no longer go as far south as Del Rio. But there will be better service, Hoffman said, to South and West Albany high schools in response to a shortage of school bus drivers.

He mentioned an app that tracks where Albany buses are on their routes in real time, and when they will reach each stop. I used the app to catch a photo of a bus at Albany Station on Tuesday night. Sure enough, the bus on Route 3 arrived at 5:18, exactly when the app said it would.

A handful of people got off, and some waited a couple of minutes for Route 2 to arrive. Then they boarded that bus to continue their trip.

Hoffman is planning a publicity drive to let people know about the improved system weeks before it actually starts. That will give transit riders a chance to figure out way in advance how they can use the bus to go where they need to go when. (hh) 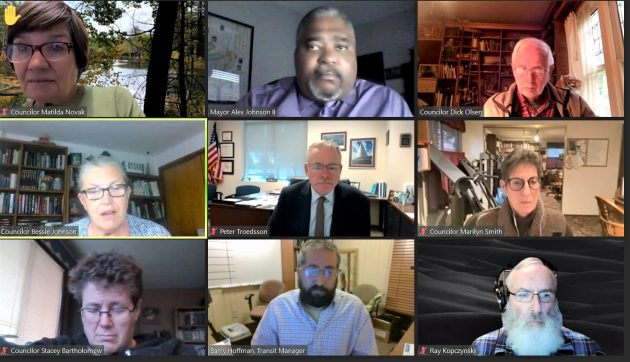 The council listens to Transit Manager Barry Hoffman, in the middle of the bottom row, on Monday.


17 responses to “Albany bus system to double in size”