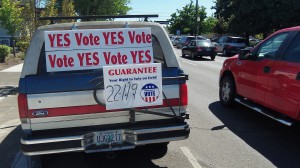 Somebody asked me what happens if Albany voters turn down the city charter amendment now on the ballot. As near as I can see, the answer is nothing. Nothing happens.

The amendment is Measure 22-119. City voters have been mailed ballots. The ballots are due back no later than Sept. 17. The measure would require voter approval before the city council can borrow money. The council put it on the ballot after rejecting an initiative regarding city debt that won a majority of votes cast in March but not a majority of all registered city voters.

The new proposal was drafted to avoid lawsuits over the one voted on in March and then rejected. It tries to clarify just what kind of borrowing would need the voters’ OK. And it says that only a regular majority vote, rather than an absolute majority of all voters, is needed in order to approve borrowing. It also says no voter approval is needed if state law says so.

The measure is a well intentioned attempt to enact something along the lines of what the voters wanted in March, but without the complications. So it should pass. But if it doesn’t, the city sticks with its current charter section on debt. And that one says that city borrowing must comply with state law. So win or lose, the result looks about the same. (hh)

From Tom Cordier: To say nothing happens if the measure fails is misleading. Mr. Delapoer (Albany city attorney) has explained what will happen to the City Council, to the Chamber Gov’t Affairs Committee, and to the Kiwanis Club last Thursday. Because the council did not place M22-117 in the charter on a technicality — not tested by a court challenge — the city will forever be at risk of violating the will of the majority of voters who voted for 22-117.
Mr. Delapoer and the council do not want that legal uncertainty to exist going forward because it negatively affects the city’s bond rating forever. The Council wants M22-119 to pass to eliminate that legal overhang forever.
To say that all will be OK just because the city abides by state law negates the whole issue. The state does not require voters to approve revenue bonds and some other borrowing tactics. M22-119 will require the city to get voter approval before all new borrowing with very limited exceptions.
Feel free to contact Mr. Delapoer to corroborate these corrections.

Cordier and Kopczynski make good points. That’s why the measure deserves to be approved. My conclusion, “about the same,” was too cavalier. I meant that if the measure passes, the council must get voter  approval for certain borrowings unless state law says it doesn’t. That’s what the charter and state law say now. (hh)