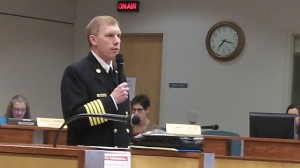 In Albany, the city council got a progress report Wednesday night on negotiations for real estate the city hopes to acquire for an expansion of Station 11, the main fire station on Lyon Street downtown. As usual, and as allowed by the Oregon Public Meetings Law, the discussion was held in “executive session,” from which the public is excluded in the interest of enabling the local government to negotiate without having to make its negotiating position public.

News reporters are allowed to sit in under the law with the understanding that details not be reported, at least not right away. Reporter Cathy Ingalls of the Albany Democrat-Herald sat through the executive session, and so did I, even though the definition of “news medium” has to be stretched a bit in order to cover me.

As reporters, we are honor-bound not to report the details of the report the council got Wednesday from Fire Chief John Bradner. But I don’t think it’s a breach of the understanding to report that Bradner is making good progress. That’s a good thing, because the council has already put on the Nov. 5 ballot a $20.3 million bond measure to help finance building a new police headquarters and replacing Station 11. The police department would move to a city-owned site on Pacific. But for the fire station to remain where it is, which is the plan, it needs more space.

Any final or formal decision to spend money on real estate would have to be made in a regular council meeting open to the public. The public also will be able to learn more about both projects at yet-to-be-scheduled open houses at both the police and fire departments. Wait for the dates to be announced, then check out these buildings to see for yourself why they should be replaced. (hh)

From Greg Storms:  You are as good, if not a better, “news medium” than anyone else in town. Thanks for a great blog! BTW, I’m relocating my business, which has been here on Lyon Street for the past 20 years, because of this. Life brings change.