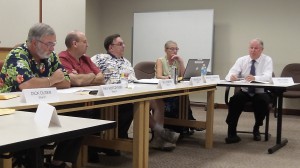 For years Albany officials have planned to replace the city’s downtown fire station and the police department on Jackson Street near the Linn County Jail. City voters likely will get a chance this fall to make it possible by voting for a bond issue to raise $20.3 million. The bond proceeds would be added to $4.1 million in Pepsi settlement funds available for the projects.

At a work session Monday, the city council agreed in principle with a proposal by City Manager Wes Hare to put the bond issue on the ballot in the election that ends Nov. 5. A formal vote setting a ballot title and calling the election will come at a regular council meeting later.

The bonds would be repaid from property taxes over 20 years, and by selling them in early 2014, the city could probably take advantage of still-low interest rates of slightly above 3 percent. Finance Director Stewart Taylor estimates a bond tax rate of 43 cents per thousand dollars of assessed value. An existing bond issue will be paid off in 2015, dropping the tax rate by the same amount, so approval of the police/fire bond would leave the city tax rate unchanged. Most council members said they’d use money from the Pepsi settlement (which ended a lawsuit over the company’s breach of a contract to build a Gatorade factory) to make the police/fire payment for the one year the bond issues would overlap.

One question Monday was whether the council should spend Pepsi money on the buildings at all. City Attorney Jim Delapoer reminded councilors that he had repeatedly cited the need for a new police headquarters in the settlement negotiations.

The police station on Jackson Street was built in the 1980s for a department about half the current size. The city owns a vacant site on SW Pacific Boulevard for a new, two-story department. Fire Station 11 on Lyon Street has served since the 1940s and is considered seismically unsafe. Experts have told the city retrofitting it would not be economical. The fire chief and council want to tear it down and build a modern station on an expanded site at the same spot. (hh)

From Mary Grace, via Facebook: Well I already know what my vote will be: YES.

From Tom Cordier:  Will CARA be able to siphon-off monies from the proposed general obligation bond?  Why is the proposal for a G.O. bond and not a public safety revenue bond?? If the sole purpose is for police and fire infrastructure improvements, why G.O. bond? Could it be that the money might be used for other purposes?
I have not heard any fire official petition the council for new facilities — maybe I missed it. I don’t care how long this has been hoped for. What earthquake standard does the current station meet? Recall the Central School now meets the “everyone-will-get-out-alive” standard, a reasonable cost/benefit standard.
I have not heard the new police chief ask for new facilities. Has he been instructed to make do with what he has to work with? Was the new chief  promised a  new facility? Seems like the new guy would make a determination of his own and be willing to defend it.

City Manager Wes Hare responded to Tom Cordier: The short answers to the questions are as follows:

— CARA has no power to “siphon off” money from anything.  In accordance with state law, it receives a small percentage of property tax revenue that would otherwise go to other taxing jurisdictions based on an increase in assessed value it helps to generate.  If folks are concerned about the extremely small percentage of the bond measure property tax receipts that would go to CARA in accordance with state law, I am sure the urban renewal agency board would agree to under-levy whatever that amount would be.

— The reasons why a General Obligation bond is the appropriate way to finance the new stations is that it comes at the lowest price and there is no public safety revenue to pay for a revenue bond.  Our police and fire departments are primarily funded by property taxes, unlike our utilities which are funded by rates.

— The money from a GO bond can only be used for the purpose specified on the ballot.  In this case, the money can only be used to pay the costs associated with completing new police and fire stations.

Tom Cordier reacted to Wes Hare’s answers:  Wes, I conclude you don’t like the word “siphoning”. I think the word is appropriate. On what experience do you state ARA would agree to underlevy? Has ARA ever underlevied?
If the general obligation. bond dollars can only be used for those purposes stated on the ballot — does that mean the ballot will disclose to the voters ARA will be funded from the bond??
Posted in: News
Tags: Albany City Council, Pepsi settlement, police and fire stations
advertisement:
Quality SOAPS and LOTIONS made locally in Scio Oregon!
Snow Creek Meadows: Our Goats Care About You!® Safely Re-Order Online Here!