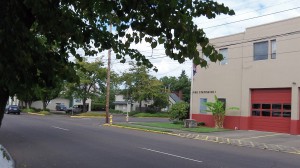 The city plans to buy two parcels across Sixth Avenue, to the left of Station 11 in this view. 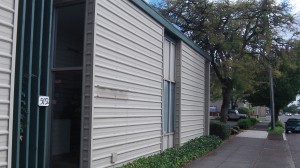 This is 519 Lyon St. S.E., one of the two addresses in the purchase agreement.

The Albany City Council is poised to acquire some of the land the city will need to replace the main fire station with a bigger one. Fire Chief John Bradner has negotiated a tentative agreement with the owners of two parcels, at 519 and 531 Lyon St. S.E., across Sixth Avenue from Fire Station 11.

The properties are owned by the family of the late Loy W. Marshall Jr. and include business offices and parking spaces. The agreement, which goes to the council Wednesday, Sept. 11, calls for the city to buy the parcels for $625,000. The money will come from Pepsi settlement proceeds set aside for the new fire station and police headquarters.

The city also is acquiring an adjacent lot on Sixth Avenue, where an arson-ruined house was demolished earlier. The fire department envisions building a downtown station of 29,000 square feet, twice as big as the current one, and with these property acquisitions the project would most likely close that one block of Sixth Avenue on the north side of the current Station 11.

In the Nov. 5 election the council is asking voters to decide on a $20.3 million, 20-year bond issue to raise most of the money needed for the new Station 11 downtown as well as the new police headquarters on a city-owned tract on Pacific Boulevard S.W. (hh)