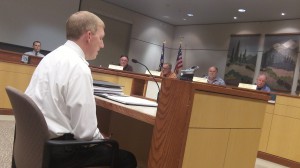 Buying some of the property needed to expand Albany’s main fire hall, Station 11 downtown, was a mere formality Wednesday night. The city council had discussed replacing the fire station in meetings over several years and authorized its staff to offer a price at an executive meeting last month. So Wednesday night, no more discussion was needed or held.

The council unanimously voted to buy two parcels across Sixth Avenue from the fire station, at 519 and 531 Lyon St. S.E., for $625,000. Buildings on the parcels, owned by the widow of the late Loy Marshall, house CPA offices and a brokerage firm.

The city hopes to acquire additional land, but nothing about that has been made public. The plan is to build a new station twice as big as the old one on the expanded site. The old station has seismic and other problems which consultants have advised the city would not be economical to try to fix.

The new station would be built — along with a new police headquarters on Pacific Boulevard S.W. — if voters approve a $20.3 million bond issue in an election that will start in late October and end Nov. 5. Fire Chief John Bradner says the new fire station likely will cover Sixth Avenue north of the present station with equipment bays. Responding to alarms, fire vehicles then could shoot straight out of the station and across Lyon without having to make a sharp right and  immediate left. They would be able to enter the bays from the back of the station, which means they would no longer block traffic on Lyon when returning from a call.

Construction plans would be made once the bond issue is approved. (hh)