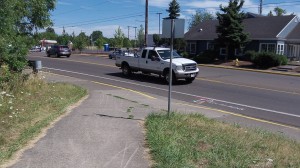 Where the path reaches Queen: No easy way to cross.

Thirty-six years after the Periwinkle Bike Path was built, now would be a good time to fix a problem that keeps it from being quite as useful as it could be.

The 1.7-mile path extends from Oak Street in central Albany to Grand Prairie Park in the southeast. Another four-tenths of a mile takes the rider through the park and, via Ermine Street, to 34th Avenue, a major thoroughfare.

The path connects to the Albany Boys and Girls Club and Periwinkle School, and with other new developments along Oak — a park, a new apartment complex and the planned Lowe’s store — it’s likely to become more important as a route for alternative transportation. (No one’s likely to want to lug a refrigerator from Lowe’s to South Albany on a bike, but for kids and others on the way two and from parks, the path is ideal.)

Near its halfway point, though, there lies the intersection of Queen Avenue and Geary Street. And getting across that is a chore. From the north, the path hits Queen far short of the intersection. Cyclists have only bad choices: Dismount and walk to the intersection, ride there on the narrow sidewalk and frighten the odd pedestrian, ride on the street against traffic (the worst choice because it’s illegal), or cross the four lanes of Queen, which has no median and rarely a gap in motor traffic. From the south, it’s almost as bad. Even if you dismount in order to cross on foot, with a bike it’s hard to reach the pedestrian-cross buttons.

Albany is trying to upgrade its rating as a bike-friendly community. Dealing with that intersection might be a start. (hh)