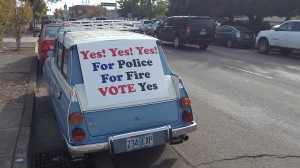 A couple of things for Albany residents and voters to keep in mind concerning the proposed bond issue for a new police headquarters and replacing the main fire station: Approving the bond likely will not increase property taxes — at least not in the conventional meaning of the word “increase.” And the amount of the proposed bond issue, $20.3 million, is not likely to cover the cost of the two projects.

The amount of the proposed bond sale was chosen because city officials anticipate that a tax of about 43 cents per thousand dollars of assessed value will generate enough money to service the debt and pay it off over 20 years. That’s the tax rate now in effect to service existing bonds that are about to be paid off.

If approved by voters, payments on the new bonds would start when the present ones end, hence no increase in taxes. Of course without the new bonds, taxes presumably would drop 43 cents a thousand, other things being equal, but the need for the police and fire buildings would not be met.

Based on estimates by consultants in 2010, city officials expect the police and fire projects to total $22-$26 million. The city council plans to use money from its Pepsi settlement to cover the amount not financed with the bonds.

The election on the bonds ends Nov. 5. Expect ballots in the mail at least two weeks before. (hh)

NOTE:  Albany police will conduct a public tour of their station, on Jackson Street next to the Linn County Jail, at 10 a.m. Saturday, Oct. 12. If you go, you’ll notice the cramped conditions in the place, built in the 1980s when the department was about half its current size.

From Gordon L. Shadle:  One correction: The new bonds will be sold in early 2014. The old bonds will be paid off in June 2015. So there will be about a one year overlap, i.e., our property taxes would go up during the overlap year. This didn’t fit the city’s campaign strategy, so the council adopted a resolution reserving $1.5M of Pepsi money to pay off the old bonds early. If the voters vote NO on the new bonds, the $1.5M goes back into the Pepsi fund for “economic development,” whatever that means.

From Gordon L. Shadle:  Per resolution on Aug. 14, the city council only reserved $2.6M of Pepsi money for cost overruns. This means at most the city has $22.9M available ($20.3M + $2.6M). That barely covers the consultant’s “low” estimate of $21.5M, inflation factor included. To my knowledge the city council has not reserved any money to cover the consultant’s “high” estimate of $26-$27M. Covering the “high” estimate requires an additional $3-$4 million of Pepsi money. The council is rolling the dice that the buildings can be completed near the “low” estimate, a highly risky decision.

Councilman Ray Kopczynski responded to Gordon Shadle’s last comment:  I believe it could be considered “risky” only if the council did not have the option (however remote) to use Pepsi funds.