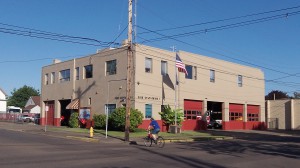 Fire Station 11 likely would not survive a big earthquake.

These projects had been on the verge of going ahead about three years ago when Albany received $18.5 million in settlement of its lawsuit over PepsiCo’s planned but not-built Gatorade factory. But the council could not agree at the time that this was the best way to spend the cash.

Now, only about half of the settlement money is left, which may not be enough to do even one of the two projects. But it’s still enough to reduce sharply the amount that has to be raised with a general obligation bond. That alone makes it smart to try to go ahead now. It would have been smarter to go ahead last year, but the city was preoccupied with the citizen initiative to control debt other than general obligation bonds.

Typically, because of interest over 20 or 30 years, bond issues cost about twice the amount of the project. So low interest rates really are a huge factor in saving taxpayers money.

Voters should know that the most urgent need the city government has is to replace Fire Station 11 downtown. The fire chief and the council want to replace it with a new station at the same site. Station 11 is in dangerous shape because a big earthquake of the type we’ve been warned about would likely bring it down, trapping fire equipment inside. This danger exists every day that a replacement is delayed. Hare is right that now’s the time to get this project done. (hh)

From Ted Salmons:  While I won’t discuss the need or not for a new fire station in Albany, I usually wonder about things like this.  Why is it that city/county governments never seem have the discipline to save for projects like this?  As usual they’re too busy figuring out ways to spend every cent they receive plus whatever they can “justify.”  Then they always have to figure in the cost of paying back the bonds into future budgets. Wouldn’t managers worth their pay be able to plan ahead for things like that?  Yeah I know, as long as we continue to re-elect poor planners like this they have no incentive to cut costs.  Secondly when cities do build new fire stations they seem to take great joy in spending much more than needed for a functional and safe building to construct monuments to their self importance (take a good look at all the fancy glass in the Corvallis main fire station, I’m sure that will hold up well during a major quake like we’re talking about).  It’s almost like they shift into the “city X down the road has a really pretty fire station, we’ve got to make ours bigger and nicer.”  It comes across as a frat-like competition to see which fire station has the largest hoses, instead of giving those who pay the bills the best value for their money. And of course a large amount of the excessive cost is causes by the “prevailing wage” requirements they put upon themselves instead of getting bids based on real marketplace wages. Why pay $15.80 an hour when you can pay $27.90?  I’m sure those same city managers do the same thing when their spending their own money.