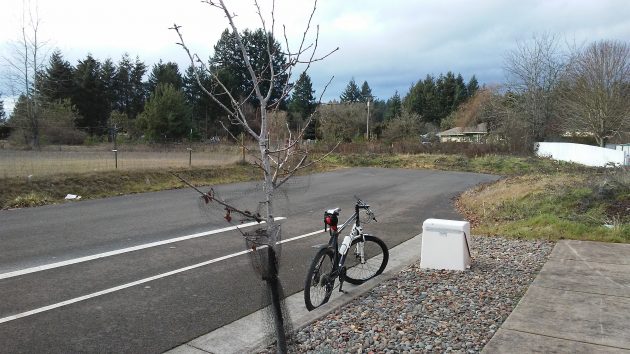 This remains a bike lane to nowhere unless the long-planned path from here to Scenic Drive goes through.

The planned Albany leg of the proposed bikeway to Corvallis survived a city council vote Wednesday night, but just barely. It took the mayor’s tie-breaking vote to keep the project alive.

Albany Councilors Bessie Johnson, Rich Kellum and Mike Sykes were ready to kill the project by rejecting an agreement with Benton County to share in the costs of the mostly state-paid bike route from the west end of Hickory Street to Scenic Drive. But Councilors Bill Coburn, Dick Olsen and Ray Kopczynski voted to approve the deal, and Mayor Sharon Konopa joined them to make it 4-3.

The Albany leg would go for a little more than a mile and, according to the original plan, link up at Scenic Drive with a route to Corvallis, which Benton County is still trying to determine whether to build or where.

Wednesday’s council discussion was precipitated by objections to the project from a young couple who own property on Walker Lane, near the path’s likely route. They complained among other things that no one had talked to the property owners about it.

Albany transportation official Ron Irish said property acquisition was being managed by the state transportation department, and because federal funds are involved, ODOT was following federal rules on acquiring rights of way. He said ODOT had asked city and Benton County officials not to contact property owners on their own.

In view of the couple’s objections, Kellum said there was no point in going ahead unless the council was willing to consider acquiring the right of way by eminent domain. City Attorney Sean Kidd told the council later it would be up to ODOT to condemn property if necessary. Right of way or easements are already in hand for the western two-thirds of the Albany leg, according to Irish.

The next Statewide Transportation Improvement Plan calls for the Albany leg of the route to be built in 2018. The cost estimate is $2.7 million. The state will pay more than $2 million, and under the agreement now approved, Albany and Benton County will roughly split the rest.

Disclosure: I have been writing editorials and news stories about the plan for an Albany-Corvallis Bikeway, including the Albany leg at issue here, since it was first proposed maybe a dozen years ago. As the council debated Wednesday whether to confirm its longstanding support of the project, the mayor asked me to walk to the podium and say something. I did — and evidently made a hash of it. If I had been more persuasive, I presume the council’s vote would have been a unanimous and enthusiastic yes. (hh)