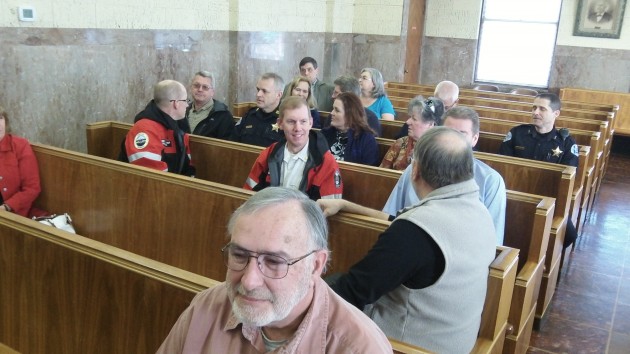 In the courtroom March 5, before ballot challenges were argued.

So why exactly is the forthcoming Albany bond-issue ballot measure written in the form of a city charter amendment rather than simply as a question on the bond borrowing itself? I think I know the answer, and it comes from the wording of the charter section on debt the voters approved in 2013.

You remember that fiasco? Voters approved Tom Cordier’s initiative to require voter approval of most new city borrowing. There was a lot of gnashing of teeth over exactly what that meant. In addition, acting on legal advice, the council decided that the measure was not adopted by the required majority of all voters. So the initiative’s sponsor and the city worked out replacement language that accomplished the same goal without the complications, and in September 2013 the voters again approved.

The first sentence of that added section says: “After enactment of this section by the people, The City Council shall not authorize any borrowing unless the borrowing is specifically permitted by this Section 44.”

Apart from the needless capitalization, this wording is clear. Unless Section 44 specifically allows it, the council can’t authorize any borrowing. Section 44 mentions nothing about a police headquarters or fire station. So even if Albany voters approve a bond issue for that purpose, the city council can’t go ahead because Section 44 does not “specifically” allow it.

And that is why the proposed $18 million bond issue for the police and fire projects is being proposed as an amendment to the charter, a new subsection of Section 44. If it passes on May 19, that section will say, specifically, “The city is authorized to issue up to $18 million … of general obligation bonds” … for police and fire capital projects.

In court on Wednesday, the question was raised, “Why a charter amendment?” Neither I nor the men who raised the question knew the answer because we had not recently read what the charter actually says. Now that I have looked it up, the reason is obvious and clear, at least to me, and it need not worry us any more (hh)

On Friday afternoon, Circuit Judge Dan Murphy disposed of two challenges to the ballot title for the May 19 election. He dismissed a petition by Gordon Shadle on the grounds it was filed one day past the Feb. 23 deadline. This deadline was valid despite a couple of city mistakes in posting it because, the judge agreed with the city attorney, there’s case law saying that statutory deadlines can’t be changed by what officials say or do.

As for Tom Cordier’s complaints about the ballot title, the judge found there’s nothing unfair about combining the police and fire projects in one measure. He also ruled against Cordier’s other criticisms, including that some of the language in the title is confusing. “The issue for the court is whether it is likely to be confusing or misleading to the public,” Murphy wrote. “The court does not find that it is. The language may not be perfect in every way, but it fairly states the proposal and that is all the law requires.”

Murphy agreed with petitioners’ arguments in court that the caption of the ballot title should say the measure would amend the city charter, and he added wording to that effect.

Now, with all that fussing behind us, it’s time for Albany voters to consider the main point, which is: For any number of structural and operational reasons, not to mention public safety and avoiding expenses for stop-gap repairs, the downtown main fire station and the police headquarters on Jackson Street must be replaced sooner or later. Voters now face a package of projects that has been thoroughly vetted by a citizens task force and designed by experienced architects who found a way to trim space needs and expense. The package will cost taxpayers less than the proposal they rejected in 2013. Barring some economic collapse, construction costs will never be lower. So the time to get these projects started is now. (hh)