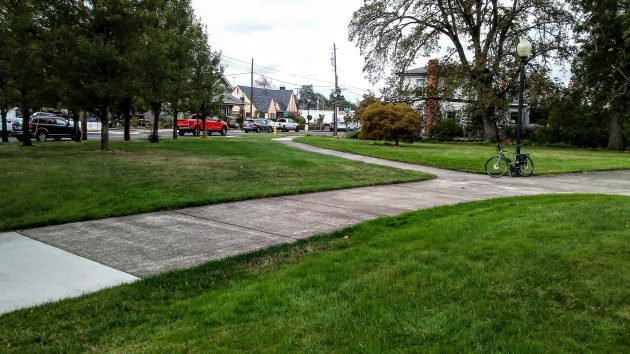 Albany is asking ODOT to allow a piece of public art somewhere on this site at Lyon Street and the offramp from Pacific Boulevard.

Whatever happened to the idea of public art in the shape of giant metal wildflowers sprouting near the Lyon Street entrance to downtown Albany? The $80,000 project was in the news last year, and now it’s up to ODOT to decide whether to permit it in the intended spot.

Last week, the city council unanimously passed a resolution asking the state transportation department to allow the sculpture on the ODOT right of way just off the Pacific Boulevard offramp on Lyon. The city parks department has maintained the grassy site for years under an agreement with the state.

Earlier this year, then-Parks Director Ed Hodney told the city’s urban renewal board that ODOT did not allow a big “wayfinding” sign there because it would distract drivers. His successor, Kim Lyddane, told the council in a memo that if ODOT nixes the sculpture too, the city will pick another spot. She mentioned Waverly and Monteith parks as potential sites.

The project is the result of a city ordinance pased in 1998 requiring 1 percent of the cost of public buildings to be spent on art. After spending some of that fraction of the cost of the new police and fire department headquarters on other items, the city allocated $80,000 to this effort.

The city has a contract with DeeDee Morrison, a South Carolina artist, to design and build the sculpture. Her design calls for an array of Oregon wildflowers, up to 12 feet tall, with images of pollinating bugs laser-cut into the petals. For a description of the design, check a report from last year here.

In her memo to the council last week, Lyddane said the city won’t ask the artist to start fabrication of the work until ODOT has approved it. She estimates completion of the project in April 2020.

Mindful that people might be wondering why the city wants to buy an $80,000 sculpture while contemplating cutting city programs like libraries and the pool, Councilor Rich Kellum made the point that it’s a “different pot of money” that’s not available for other things.

Editorial aside: This is the standard explanation when governments spend money on non-essentials while basics don’t get done.  But the “different pot” argument, while true, makes no sense to citizens who ask: Well, if one pot has extra money and another not enough, why not change the laws and the system to get rid of all those different pots?(hh) 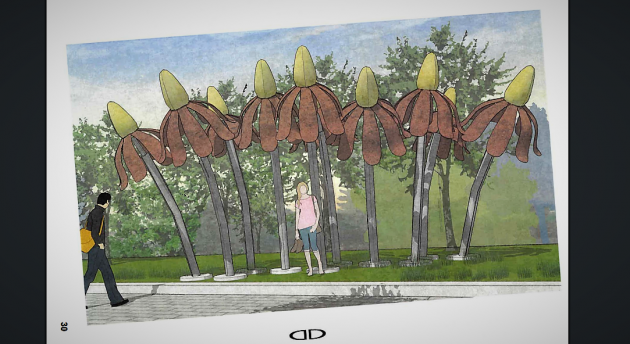