Albany and railroads: A new era? 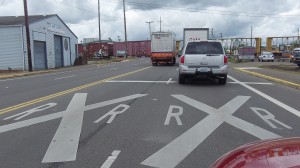 Waiting on Queen Avenue while railroad cars are switched.

The legal strife over an Albany rail line lasted about five years, but now the city and two railroads have put it behind them and embarked on an new era of cooperation. At least that was the hope expressed by city officials Wednesday night when the Albany City Council unanimously gave final approval to a new city franchise for the rail line that runs the length of Water Avenue along the Willamette River.

The line is owned by BNSF (Burlington Northern)  and operated under a long-term lease by the shortline Portland & Western Railroad. In 2008 Albany sued the railroads to force them to accept a city franchise — essentially permission to operate — covering the line in the city street.

Sporadic negotiations with the railroads by City Attorney Jim Delapoer culminated in March 2013 in an agreement in which, among other things, the city grants the railroad a franchise for the rail line and BNSF pays the city $35,000 and gives it two parcels of property off Water Avenue. The agreement also covers other issues, including how the city and Portland & Western would split the cost of crossing gates if necessary. The Water Avenue line has to be “improved to good condition” within six months, according to the franchise.

City Manager Wes Hare hoped the franchise accord was a signal of a good working relationship with the railroads. Delapoer said the city now is getting cooperation from the shortline “we have not previously seen.”

Meanwhile the P&W has been working to expand its Millersburg yard so it no longer has to delay traffic on Queen Avenue by building trains at the yard there. With the franchise issue out of the way, that goal may have moved within closer reach. (hh)

From Rolland Brower: Guess the stagnated waterfront development will continue on a slow space with this decision!  When will the next derailment happen, cutting off emergency services from the residences?  When it happens, the City council can shoulder some of that responsibility.  All one needs to do is drive that section of Water Ave to see the deplorable condition of the track and road, some places where there are six inch drops as the foundation of the railway decays.

The franchise requires the track to be restored to good condition within six months. (hh)
From Brower: I did read that part, but to be honest, “good condition” leaves a question in one’s mind as it’s just good enough to get by.  “Excellent condition” leaves a lot better feeling.  I know you ride your bike in this area and know how awful it is.  Yesterday while my wife and I were on our morning walk we were talking about the dips and valleys it has, which is why I’m sure the old ties below the track (and concrete put in 10+ years ago) is a derailment waiting to happen.  It’s a section of city road we now rarely drive our vehicles down as we don’t want to do damage to them, or have to avoid a passing vehicle that is trying to avoid the problems.
Posted in: News
Tags: BNSF, franchise, Portland & Western, Water Avenue