‘Albany Alley’: Downtown dining out back 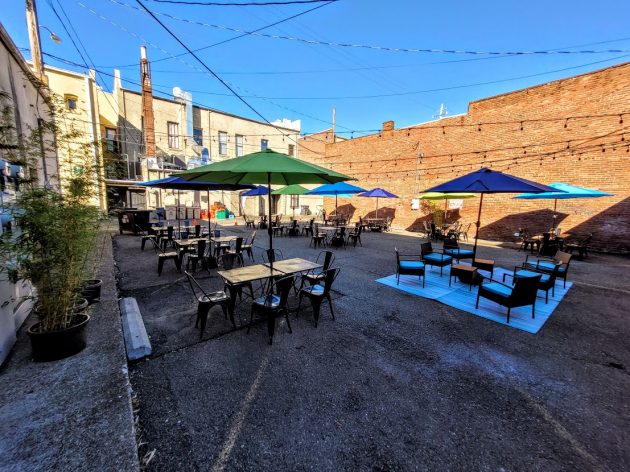 Nobody was dining there Sunday afternoon, but “Albany Alley” looked like a cool place.

It was back in January that the idea of a dining spot in a downtown Albany alley first hit the local news on this website. Now it’s become a reality, and the organizers no doubt hope that the mild weather will last a while so people can try the place out.

I came across “Albany Alley” Sunday afternoon after seeing it mentioned in a Facebook post a few days before.

First off, it’s not really in an alley. Instead, it’s in what normally is a parking lot off the alley behind 229 and 231 First Ave. S.W., the office of Varitone Architecture and Design. But you have to use the alley to get there. It runs from Ellsworth Street to Broadalbin Street between First and Second Avenues.

I went through there on the bike after seeing the sign on Broadalbin. Afterward, my wife and I picked up dinner at Taqueria Alonzo and took it over to one of the tables there.

Lise Grato, head of the Albany Downtown Association, told the city council about plans for this alley dining in January, and the council liked the idea. She was hoping that with the help of a state-level grant and volunteer manpower, the thing could be going by the summer. As it turned out, it wasn’t until last week that the alley was ready and opened up.

The lot has been nicely spruced up, and there are tables and umbrellas, along with potted plants and overhead strings of lights that come on before it gets dark. (They did on Sunday anyway.)

The idea is for people to get take-out meals from any of  the many downtown restaurants (most within walking distance)  and then walk to the alley to eat them. Tables are arranged with plenty of space between them. It’s an expansion of putting restaurant tables on sidewalks, which has taken off since the start of the Covid pandemic.

According to what I read on the Downtown Association’s Facebook page, Albany Alley is open Friday and Saturday afternoons and evenings and Sundays until 4. We were there well after 4, the only people there, and nobody chased us away. (hh) 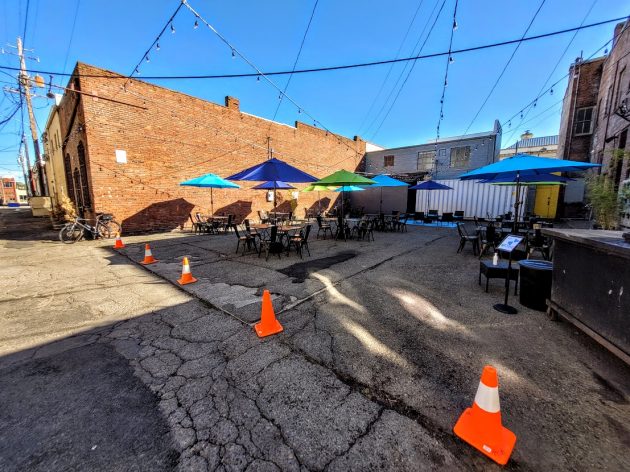 The dining area from the alley side on Sunday afternoon. 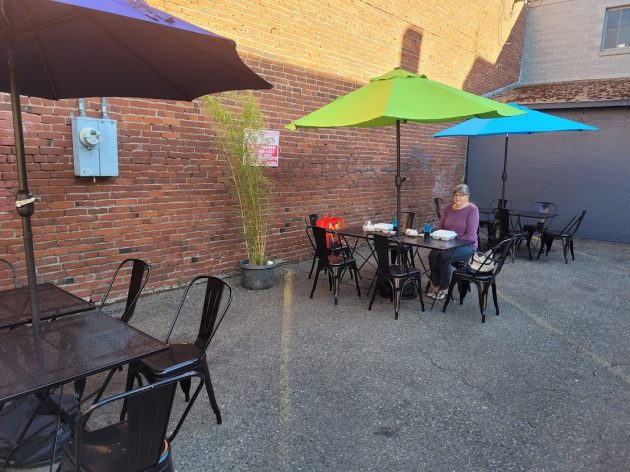 A diner takes in the alley’s ambience Sunday night. (Her husband shot the photo.)


7 responses to “‘Albany Alley’: Downtown dining out back”