Albany ADUs can be mobile homes 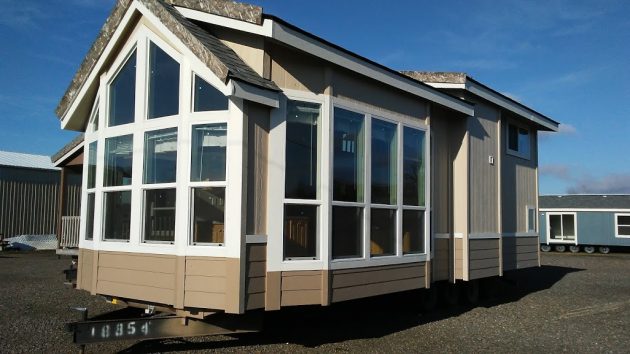 I saw this unit at Leisureland Homes off Oakville Road. How would that be as an accessory dwelling?

The Albany City Council gets another chance this week to pass a code change to allow detached “accessory dwelling units” — essentially small second houses –on all single-family residential lots in line with a state mandate.

Mayor Sharon Konopa and a four-member council majority have been at odds on the issue. The four want to allow bigger units with few restrictions such as parking and ownership requirements. The mayor fears this could destroy the character of traditional single-family neighborhoods and create problems with on-street parking. She has used her veto power to block a code change the four voted to pass.

In his regular Friday memo to the council, City Manager Peter Troedsson reminded the members that action on the issue was put off last month “in order to provide opportunity for further consideration, and potentially for direction to staff.” On Wednesday, he said, the council “will again have an opportunity to approve an ordinance which makes only those changes necessary to bring us into compliance with state law.”

The current code allows so-called detached ADUs as big as half the main residence, up to 750 square feet, in some but not all single-family zones. The change blocked by the mayor, which had been approved by the planning commission, would allow units up to 900 square feet.

The other day I saw a grand-looking little house on wheels on the lot of Leisureland Homes at Highway 34 and Oakville Road. I wondered if that sort of dwelling could be set up as an ADU, and the answer appears to be yes.

The question came up before the planning commission on Oct. 15. According to the minutes, commission chair Larry Tomlin “asked whether the provisions would allow mobile homes as ADUs. Staff said they they would.”

Further, commission member Dala Rouse “asked how tiny houses are regulated. Staff said that those are governed primarily by the Building Code.”

That sounds as though if you want to install a “tiny house” in your back yard as an ADU, and it can meet setback and other requirements, even the current code would probably say that’s OK. (hh)


11 responses to “Albany ADUs can be mobile homes”