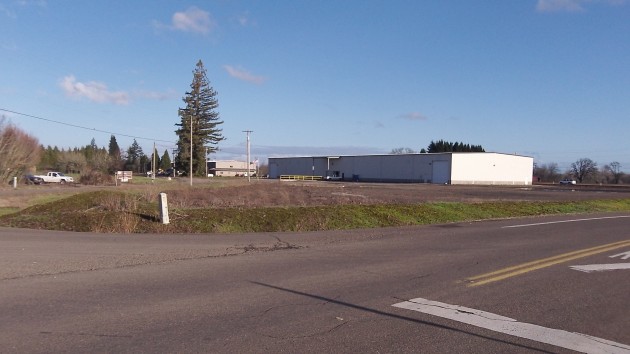 At Granger and Hyslop Roads, the path would follow this corner to give the warehouse in the background a wide berth.

A group of land owners along the rail line between Albany and Corvallis is determined to prevent construction of the Albany-Corvallis Bike Trail, but their stated reasons make no sense, at least to me. And if it comes to the point where eminent domain has to be invoked, I don’t see how their objections would make sense in court.

There is no way that a narrow concrete path right next to the north side of the tracks would interfere in any significant way with farming or any other operation on adjacent lands. Yet, not only have some owners refused to negotiate easements with Benton County to allow the path to go through, but they have also pledged to hold up a county conditional use permit through appeals. And in case that fails, this week they asked the Oregon Transportation Commission to rescind the $2 million grant under the Connect Oregon program that was approved in August to pay for part of the project.

As reported by Bennett Hall in the Corvallis paper, Karla Chambers of Stahlbush Island Farms, which has a warehouse on Highway 20, told the commission that the path “runs up the middle of many of our businesses, causing significant business hardship.” Really? The only warehouse near the proposed path is at 6425 Hyslop Road N.E., at the corner of Highway 20 and Granger Road. As published maps show, the path would skirt the corner by going north along Granger about 300 feet, then cross Granger at the corner of Hyslop Road, then follow Hyslop to rejoin the railroad tracks. It would no more interfere with the warehouse operations than the existing street there does.

County records show that the warehouse property was bought a few months ago, on July 29, 2014, by Soda Mountain Broadcasting Inc., an arm of Chambers Communications of Eugene, which had previously sold its television stations including KEZI. (Bill Chambers of Stahlbush Farms was a board member of the broadcasting company.) The bike trail plans have been in the news for years. And if the farm thought its warehouse operations would be hampered by people cycling past, why did they spend $1.6 million to buy the place?

Benton County has again pointed out the upsides of this project. The main one is that it reduces the danger of death and injury for cyclists — and motorists too — on heavily traveled Highway 20. As a side benefit the trail advances public health through more exercise for more people and maybe some marginal reduction in air pollution from motor vehicles.

Benton County has made a compelling case in its conditional use permit application that measures will be taken to make sure the path has no adverse effects on adjacent land owners. So I hope that the county planning commission grants the permit, that appeals are considered and denied as promptly as possible, that the Connect Oregon funding is not withdrawn, and that the county then proceeds to acquire the necessary easements, by eminent domain if that’s what it takes. And then I hope this project gets done before all of us who have pushed for it for years curl up and die. (hh)