Alb-Cor path: Worth the effort 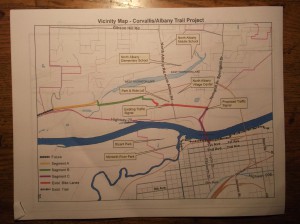 North Albany segments of the planned Albany-Corvallis path are shown on this map prepared by Albany’s city staff.

It’s taking a lot of time and money to carry out plans for a bike path between Albany and Corvallis. Is it worth all this effort and public cash? That depends on your point of view. As for me, I wish it was not costing as much and could get done more quickly and simply, but yes, I do think it’s worth the effort and expense.

The plan, originally pushed by Benton County Commissioner Linda Modrell and others more than a decade ago, was to build a bike path alongside what was the former Southern Pacific railroad track between Albany and Corvallis, a segment of the so-called Toledo Branch. Now the line is owned by the Union Pacific and operated under a long-term lease by the Portland & Western.

An alignment of the path has been mapped out, and some construction has taken place on the Corvallis end. On the Albany side, the city council has just agreed to apply to the Oregon Transportation Department for up to $2 million to construct three segments of the path in North Albany. It would follow West Thornton Lake Drive, then cut south across the rail line, follow the track east until eventually connecting with the bike lanes on Hickory Street, and then head downtown on Spring Hill Drive and the Lyon Street Bridge.

The overall vision is to allow bike riders to travel the 10 miles between Albany and Corvallis on a route separated from the heavy traffic and freeway speeds on Highway 20. You can bet that once the path is built, it will be used by more and more people on two wheels. The benefits in terms of health, exercise, fuel savings and pollution reduction will accumulate over time. I just hope the thing gets built while the people pushing for it, including me, are still alive. (hh)