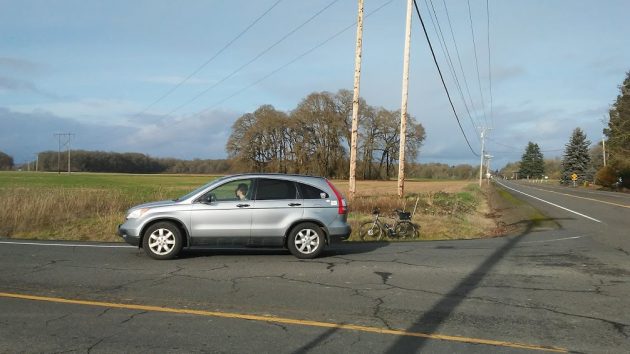 The corner of Ellingson and Columbus on Jan. 4: Land in the background is where the Henshaw Farms subdivision is platted. The little oak island likely would be spared.

The Albany City Council Monday had a few questions, and then it agreed to have the staff draft an agreement under which the city would contribute $500,000 toward street construction for a platted subdivision in South Albany.

This involves the 226-lot subdivision on the former Henshaw Farms approved by the planning commission in May 2014. It’s on part of the acreage west of Columbus Street and north of Ellingson Road, annexed to the city in 2005. Development has not taken place partly because of the cost of conditions imposed by the city for the annexation, including full street improvements on both sides of Columbus.

Under the proposed agreement with Beaverton-based developers Metropolitan Land Group LLC, the city would contribute $500,000 from its fund of transportation system development charges (SDCs) toward the developer’s expenses of building streets, utility systems and so forth. In return, the city would get to keep building fees that otherwise would go back to the developer for having had to construct improvements benefiting the east side of Columbus, once that side develops. This arrangement is as complicated as it sounds, but the upshot is that the city eventually would get back about $325,000.

Albany city officials are interested in the Henshaw Farms project getting started as a step toward development between I-5 and Highway 99E as envisioned in the South Albany Area Plan adopted in 2013.

One of the council questions was this: If we take $500,000 of street SDCs out of that fund, what other projects would have to be delayed or dropped? None, the staff’s answer was, because while there’s more than $2 million in the fund, no particular projects have been identified for that money.

SDCs are collected on new construction and by law are reserved for facilities made necessary by population growth.

The proposed agreement, once drafted, is subject to another council vote. There’s no word on when the subdivision will actually be built.

By the way, judging by the plat of all those lots, that little copse of oaks in the photo above may survive. It’s in an area where no houses are shown. (hh)


7 responses to “Aid to S. Albany subdivision gets council nod”