After the Big One, you need wheels 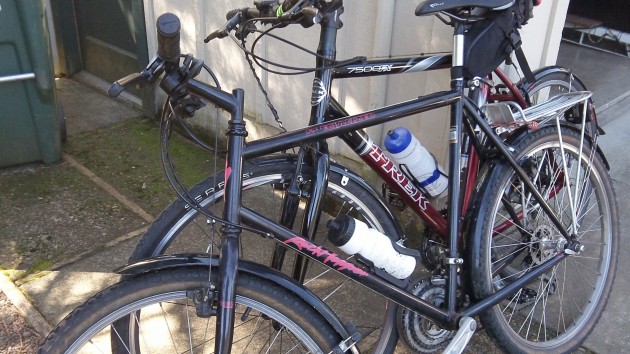 An essential part of your earthquake kit.

The minor earthquakes in the Sherwood area and on Mount Hood are routine and nothing to worry about, according to scientists quoted in the news. But they remind us all that, as we’ve been warned countless times, the Big One is coming and we had better be prepared.

The same is true in California, which also had a recent quake, stronger than ours but still mild. This prompted Sen. Barbara Boxer, D-Calif., to issue the customary reminder, urging people to have food and water for emergencies. BikeNewportBeach thought that was not enough.

In a letter to Boxer, the organization wrote: “As a Californian, it is hard to imagine an earthquake preparedness kit without provisions for immediate transportation after a damaging quake…  A bicycle will be the only reliable transport available, does not need gasoline and can manage the roads when they are too damaged for cars. Your office should be recommending all Californians have bicycles in good repair for every member of the family, extra tubes and the ability to patch a flat tire. At least one bike per family should have a handlebar basket to carry briefcases, schoolbooks, groceries and other supplies.”

That is sound advice for Californians and just as sound for Oregonians (assuming that schools and stores will reopen in time for that basket to be of any use). The Big One, when it hits, will disrupt the transportation system and make fuel hard or impossible to get, likely for weeks and even months. Cars may be useless for quite a while, at least in the hardest-hit areas.

Pedal power is the answer in that kind of an emergency. It will allow people to travel far enough to check things beyond their neighborhoods and assess where else they might have to go in order to survive until repairs are made. (hh)