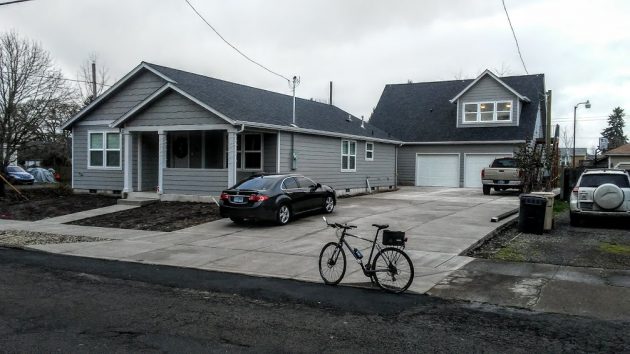 With Iran launching missiles at U.S. targets in Iraq, it seems ridiculous to write about “accessory dwelling units” or ADUs in Albany, but this website is mostly about local stuff, so what are you gonna do?

Since 2018, four members of the council and Mayor Sharon Konopa have been at odds over the size of ADUs allowed in Albany. The development code says they are limited to 50 percent of the main house, up to a maximum 750 square feet. The council majority wants a maximum 900 square feet.

The mayor twice vetoed council decisions in favor of 900 square feet, and tonight (Wednesday, Jan. 8), her latest veto is on the council agenda for an attempt to override it. It takes five votes to overcome a veto, and unless either Bill Coburn or Dick Olsen changes his stand, the override will once again fail.

It’s odd that the maximum size of ADUs — a difference of 150 sqare feet or one small room — should be such a big deal to the mayor and council. Especially if you look at ADUs that have recently been built.

Take, for example, the new house and detached garage plus ADU that developer Bob Mitchell built at 705 Fifth Avenue S.E., in the Hackleman Historic District.

According to the building permit available online, the one-bath, one-bedroom ADU on top of the garage has 532 square feet of living space. So it falls well within the limit the mayor wants to keep.

But the whole accessory building has a 952 or 1,556 square feet, depending on which entry in the permit form is the one that matters. Either way, the accessory building is bigger than what even the council majority wants as a limit, and yet it looks to be in harmony with the main residence and the neighborhood as a whole.

The ADU has a separate address, according to the city’s InfoHub map. So, if even ADUs much smaller than 750 feet can serve the purpose of a separate residence, why demand a bigger limit as the majority does? And if units way bigger than 900 units can fit in perfectly well in existing neighborhoods, why would the mayor fight the council by insisting on nothing bigger than 750?

The council and mayor have been debating this based on what terrible things they imagine will happen if either side wins. They might relax their respective points of view if they looked at some examples — not just the one on S.E. Fifth, but also on Broadway and Calapooia streets — of Albany ADUs in real life. (hh)

Postscript: As expected, no one on the council changed their minds Wednesday night. The mayor’s veto was upheld, 2 to 4, as before. This may not be the end. Councilor Rich Kellum said if someone takes the city to the Land Use Board of Appeals over the ADU size issue, the four votes against the veto would also refuse to authorize defending the appeal before LUBA. But it’s hard to believe this would actually happen. The size of ADUs is not specified by state law, so the city can regulate it. And development code requirements on ADUs regarding parking and ownership are not being enforced. Instead, the city is following state law on those points. So the only issue someone might raise with LUBA is that the situation is confusing to someone just reading the code. Would LUBA take that up? We’ll see. Maybe. (hh) 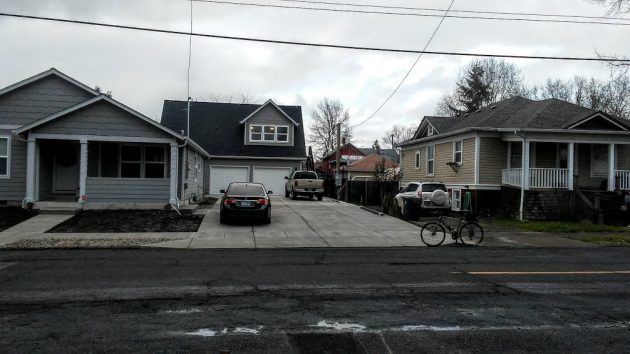 Note how the new house, garage, and ADU at Fifth and Thurston fit in with their neighbors.


18 responses to “ADU dispute: Is size really that crucial?”