Adair: Building suburbs in the country 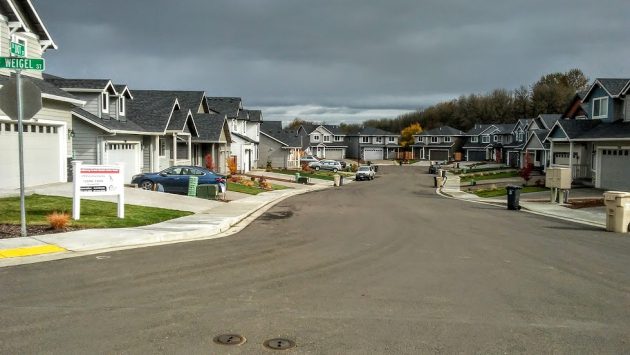 Looking down Dot Street in the new Calloway Creek subdivision in Adair Village on Oct. 21.

In Adair Village, the transformation of the countryside south of Ryals Avenue into suburbia is well under way, as I could not help noticing as I drove by there on Monday last.

The first houses have been sold and look occupied, and construction continues on other streets in this phase of a development called Calloway Creek. I picked up a flier showing 59 lots. On one of the streets, a cul de sac named Dot Street, 16 houses are shown as sold or with sales pending.

The Calloway development was approved by the city about two years ago. Plans for the 41-acre site south of Ryals and east of 99W call for 198 houses. It’s all part of a longtime Adair ambition to become a bigger town in order to attract more services for the people already there. The city’s zoning map shows room for much more housing.

The real estate flier says the location is “ideal for the commuter.” From Adair, it’s six miles to the center of shopping in southeast Albany. (That’s as the crow flies. Cars would have to go a bit farther.) To Corvallis, it’s a straight eight-mile shot down 99W. In the other direction, Monmouth is 12 miles away and Salem 27.

Ryals Avenue used to be a sleepy county road. By 2040, the Adair transportation plan projects Ryals to be wider, to have sidewalks, and to serve an additional 3,750 vehicle trips per day, for an increase of 495 percent.

People have to live somewhere, obviously, and the houses at Calloway Creek look really nice. But you’d think that with everybody supposedly worried about our effect on the environment, they’d build houses closer to jobs and shopping so people don’t have so long to drive. (hh) 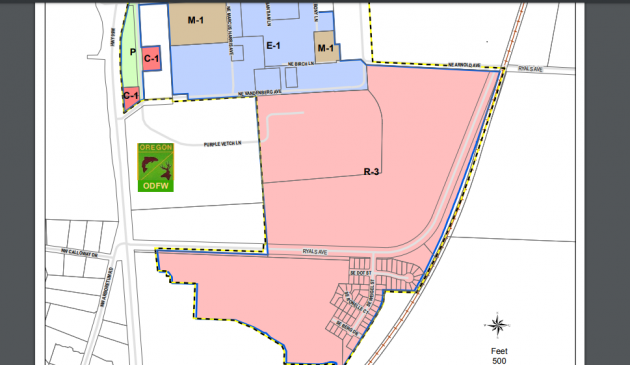 The pink area on Adair’s zoning map is intended for more housing.

13 responses to “Adair: Building suburbs in the country”