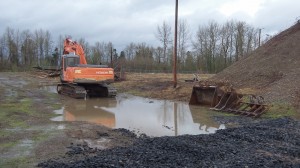 The long-delayed Edgewater Village development on Albany’s riverfront reached a milestone today: A contractor started cleaning up the site and preparing it for the construction of the first five houses. The city noted the occasion by sending out a press release that quoted George Diamond of Edgewater Village LLC: “Finally we get to see results from our seven-plus years of planning and hard work by both the city and our consultants with the creation of this new residential development.”

The plans call for 60 units on the property north of Water Avenue and bounded by Main Street on the east and the Lafayette Street trestle on the west. CARA, Albany’s downtown urban renewal district, has spent $2.4 million on the project, a public-private partnership, so it’s been anxious to see it get started.

On Wednesday night, the CARA advisory board will start considering how to spend $3.1 million on so-called infrastructure projects, and “streetscape” improvements on Water Avenue are among the projects suggested by Kate Porsche, urban renewal and economic development director. (The meeting was postponed because of a person’s illness.)

The city statement quoted Diamond of the Lake Oswego-based development company: “Cutting-edge urban small home designs combined with beautiful riverfront lots and a splendid greenway will allow residents an opportunity to enjoy local amenities at affordable prices. Where else can you walk to the downtown for coffee and stroll on the beautiful Willamette River and not spend a fortune?  The new development will be true urban living and is designed to fit into the historic neighborhood… When we began this process we did not anticipate one of the worst recessions in history which ultimately slowed us down for over five years. In hindsight, the extended time helped us design better living with smaller-fee simple lots with over 1,500-square foot homes instead of dense townhomes.”

Construction is to start in March, and the first five homes are to be finished by the fall of 2014. (hh)


5 responses to “Activity at Edgewater Village!”