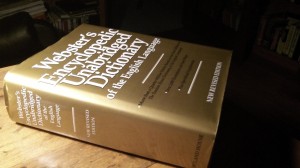 Maybe they should look up words before they fling them about.

It’s bad enough that our top officials keep screwing up. Why do they have to cheapen the English language as well? If they don’t know the implications of words like “accountable” and “responsible,” they should not use them.

The Obama administration had three years and spent uncounted millions of dollars to get ready for the launch of the new federal insurance law . Unfortunately the preparations were not enough, or they were the wrong kind, or they were doomed from the start by the complexity of the law. So the big signup for federally subsidized health insurance could not start in time.

Well, things do go wrong sometimes. But what about the people whose job it was to prepare? Kathleen Sebelius, the secretary of health and human services, apologized and declared that she was “accountable” for the failures, according to the Associated Press. “Accountable” how? She didn’t get fired, her pay was not docked, she was not reprimanded, and as of this writing she has not resigned.

President Obama, meanwhile, declared in a speech: “And I take full responsibility for making sure it gets fixed ASAP.” Well, saying “as soon as possible” makes his pledge of responsibility rather flexible. But suppose the online enrollment system does not get fixed in time. Will the president then resign because he takes “full responsibility” for a job that did not get done? No, he won’t. He’ll just act as though his words did not mean a thing, which is just about right. (hh)

Ted Salmons:  There you go, Mr. Hering, expecting politicians to actually take responsibility or be held accountable. Remember you’re talking about a piece if work like Sebelius, who stated she doesn’t work for ‘the people’ calling for her resignation. I guess she only works ‘for’ the people she chooses to.

Gordon L. Shadle:  After squandering $400M over 42 months with nothing to show for it but millions of irate citizens, the only acceptable follow-up to declaring yourself “accountable” is “and I’ve tendered my resignation effective immediately.”

Tony Overman, on Facebook:  Thank you! For the past two days I’ve been ranting to anyone who’d listen the exact points you are making. (I’m officially turning into Hasso…which is a good thing.)