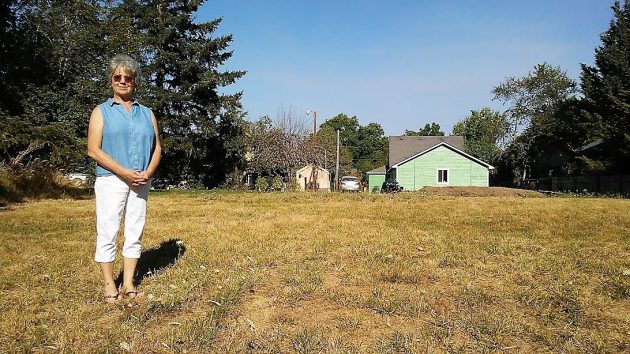 Marcie Howard would like to build an “accessory dwelling unit” right about here.

When you see the spot where Marcie Howard and her husband, Gary, would like to build a small house on the property of their son, it’s hard to see why the city of Albany and Mayor Sharon Konopa won’t let them.

The Howards moved to Albany last fall from the north Oregon coast after Gary, 76, had major surgeries close together and was suffering from the effects. They hoped to build a place behind the house of their son, Douglas Howard, on his 1.7-acre property between Broadway Street and the Calapooia River floodplain.

But even though the 2017 legislature required cities to allow “accessory dwelling units” including detached ones, the Howards have been stymied so far by Albany’s development regulations and, most recently, by Mayor Sharon Konopa’s veto of a change in the development code.

Which leaves the Howards where they were before — renting a house on Ninth Avenue and unable to proceed. More than once, Marcie Howard has appeared before the city council, most recently last Wednesday, to describe her family’s situation. Friday I met her at her son’s place to see for myself.

Konopa says she worries about accessory units clogging streets with parked cars and turning single-family neighborhoods into apartment zones. But on the Howard property on Broadway, there’s plenty of room for off-street parking. And just one or two houses away, a series of apartments has existed for many years.

Marcie and her husband could put a “hardship dwelling,” a manufactured home, on the property with a doctor’s certificate. But that would require the neighboring owners’ permission, which could be revoked by any one of them every two years. And when the medical hardship ends the home would have to be removed. So if one spouse dies, the other would be left homeless and the son would be stuck with getting rid of the home.

So now what? The mayor, still recovering at home from a car crash, has said she wants to work on a new version of development code amendments on accessory dwellings. No word on the timing.

In a case like this, where there is more than enough room for two or three additional houses, you would think a reasonable city government could draft — and quickly adopt — rules to permit one accessory dwelling unit that’s big enough to allow two parents to live close to their son. (hh)

Marcie Howard and her son, Douglas Howard, in front of Doug’s house on Friday.