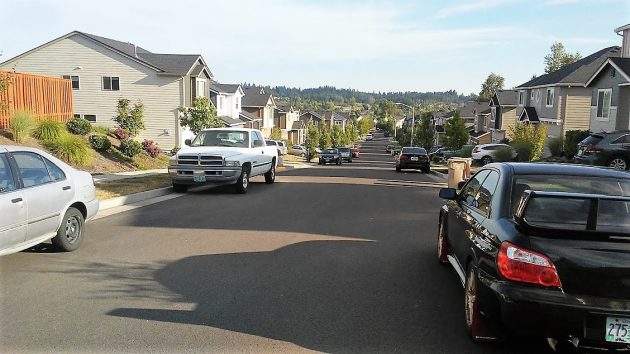 You can see that on-street parking for accessory dwellings might crowd streets like this one in North Albany.

The city council flap over accessory dwellings was not resolved on Monday, and a closer examination makes me wonder why there’s a flap in the first place. Fixing Albany’s development code to align with a new state law should have been no big deal.

The controversy was not settled Monday because Mayor Sharon Konopa could not attend the council’s work session. She and her husband were in the hospital after being in a car crash over the weekend. So the council voted to put off discussions of development code amendments on accessory dwellings, amendments the mayor vetoed after the council voted 4-2 to approve them on July 11.

The 2017 legislature required cities and counties above certain sizes to allow accessory dwellings –inside of, attached to, or detached from the house — on any single-family residential lot, subject to reasonable restrictions on size, setbacks and other factors.

Albany’s development code already allows accessory dwellings in single-family residential zones. But it allows detached ones only if they were built before 1998. And then there’s a provision allowing ADUs in 10-lot or bigger subdivisions approved after 2007, which is puzzling because the units are already allowed everywhere.

The existing code restricts the size of accessory dwellings to 50 percent of the main house or 750 square feet, whichever is less. It also requires at least three off-street parking spaces to serve both units on the lot.

The vetoed ordinance drops the ban on new detached units. It increases the allowed size of accessory units to 75 percent of the main unit or 900 square feet. It keeps the requirement of three parking spaces but says one of them may be on the street if there’s room in front of the place.

There’s no compelling reason for the increase in size. For an accessory unit in the house or the back yard, 750 square feet is plenty big enough to house a couple of relatives, or other tenants.

There’s no good reason to change the parking requirement either. Some of the streets in town are already crowded with parked vehicles at night. No reason to make the problem worse, even if there’s not likely ever to be a tidal wave of new accessory dwellings. If a homeowner has room for an additional resident, he also should have room for another parked car.

The mayor vetoed the ordinance because she opposed the jump in square footage and the slight relaxation in the parking rules. She has a point, and so have Councilmen Bill Coburn and Dick Olsen, who voted against the ordinance.

Albany could easily comply with the letter and spirit of the state mandate by passing a code amendment without those two changes. That’s what the council should do forthwith, regardless of whether the mayor is present or not. (hh)