About litter and plastic bags 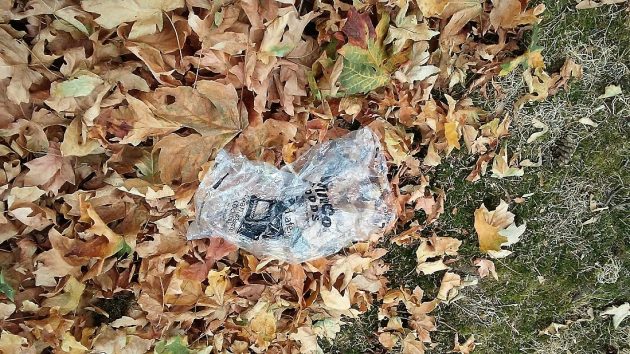 Finding this bit of litter in a pile of leaves in our yard today prompted me to consider, once again, plastic bags and whether they should be banned. My answer: No, they shouldn’t because they are useful, but we all should be more careful when we put them in the trash.

One of the reasons that five Oregon cities have banned the use of plastic grocery carry-out bags is that too much of the plastic ends up littering our streams, beaches and ocean. On a website, Portland points out that these flimsy things often blow out of the back of garbage trucks. I’m pretty sure that’s how this bit of debris ended up among the leaves because I know I didn’t bring it home.

This kind of bag, by the way, is not affected by the bans in effect in Portland, Eugene, Corvallis and Ashland. It’s not a carry-out bag but used to contain items, usually produce, inside the store. Manzanita, population 725, south of Cannon Beach, has just joined the other four cities. Its ban takes effect Nov. 5.

Efforts to impose a statewide ban so far have failed. But even though they could, some companies no longer give you a plastic sack to take your purchases home. That’s a problem for me when I’m on my bike and stop by a store, like those on the coast and in Southern Oregon operated by the company that runs Ray’s. I need a bag with openings that I can slip over the handlebars.

I can see the problem with litter, though. All of us can see it, especially along urban streams. On Albany’s Periwinkle Creek, for example, I’ve seen the brush festooned with shreds of torn plastic film after the springtime water has gone down.

All we have to do to prevent this is to keep the plastic bags we get, re-use them, then bundle them up to return to the store or put them in the trash in such a way that the wind can’t blow them around. (hh)


7 responses to “About litter and plastic bags”