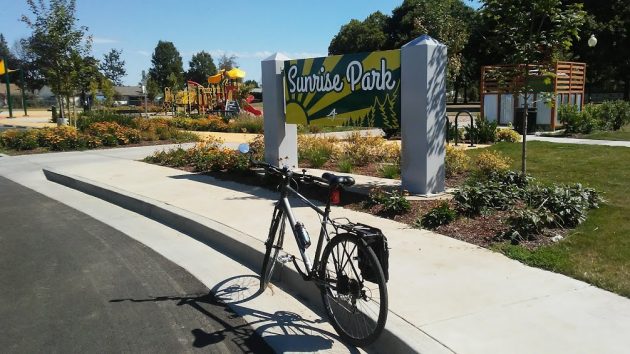 The entrance of Albany’s Sunrise Park on the afternoon of Aug. 31.

Did they ever complete the renovation of Sunrise Park, I was wondering one day last week. So, riding along on Queen Avenue, on my way somewhere else, I turned right on Thurston Street to take a look.

It had been more than a year since I had paid a visit to that southeast Albany park. I had taken an interest because the city had spent about $239,000 in federal antipoverty grant money to make improvements there, in a census tract where people can use all kinds of help.

The construction, including a parking lot, was done last summer under a $259,000 contract. In addition to all kinds of other work, the city installed a sparkling new playground as well as a portable toilet. So, is the job now complete? Not quite, it turns out. A small section is still torn up, and the circular paved path has a couple of gaps.

To mark the essential completion, though, the parks department held its first “Fun in the Park” program at Sunrise at the beginning of the summer. What remains to be done now, maintenance supervisor Rick Barnett told me, “is a small phase II of the park plan.”

“We had some available Community Development Block Grant dollars left and are using those to replace (the) sidewalk with a more modern, well lit and through route,” he explained. “We were originally going to take out the existing sidewalk to the south but decided with a little work it could be a good complement to the new sidewalk by providing a loop that walkers or small kids on bikes would enjoy. It should be substantially finished in a few weeks.”

Planning for Sunrise Park improvements started in 2013. Later the plan was expanded, and there were additional delays associated with getting a permit to disturb wetlands in the 3-acre park. Now, it may have taken six years from start to almost finish, but the result is a very nice neighborhood park.

Want to see for yourself? Go take a look. To get there, go east on Queen and when you get to Thurston, make a right. (hh) 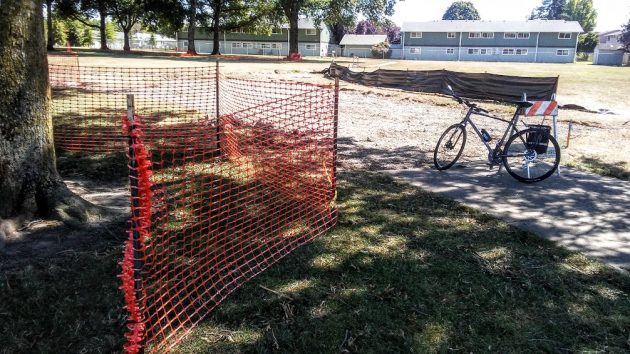 This part of the Sunrise Park sidewalk still needs to be completed.