A welcome sight on the beach 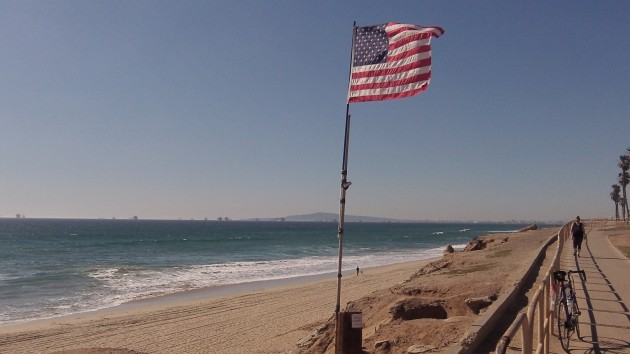 There’s a story behind this flag, and you can read part of it if you interrupt your bike ride  — as I did last week — where it is mounted on the stump of an old utility pole overlooking the Pacific Ocean in Orange County’s Huntington Beach.

A box near the flag contained two or three fliers, and I picked one up and read it when I got home. It says Zach Martinez put up a flag there for Memorial Day in 2010. The following Tuesday he was about the take it down again when a woman asked him what he was doing. She urged him to leave the flag up because when she had passed by the place over the holiday, it had made her think of her two grandsons serving in the Middle East.

“The rest is history,” Martinez says on the flier. “Now I change the flag every three weeks, as I have for the last three and a half years. I am seeking approval from the city to make it a permanent landmark for active-duty personnel, veterans, family and friends.”

He has called the spot Patriot Point. If you google the name and location, you’ll find a Facebook page and several other mentions. One of them is a story about Martinez and his project that appeared in the Orange County Register just last month. Reporter Lauren Williams tells us that Martinez is a 66-year-old surfer, grandfather of four and Vietnam veteran who hopes that the flag site on the bluff above the beach will become a recognized memorial of some kind.

The story also says that since Memorial Day five years ago, the flag has been torn down and otherwise vandalized 15 times, and each time Martinez has put it back up. I’m glad to say there was no sign of vandalism on that breezy afternoon last week. Crisp in the afternoon light, with the horizon dotted by container ships waiting to unload at San Pedro or Long Beach, the flag made a welcome sight. (hh) 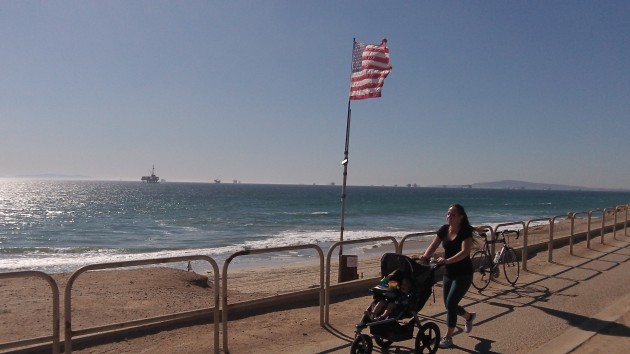 A reminder for the next generation as well.