A warmer West? Not lately 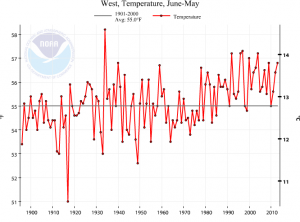 To read the papers and watch the news, you would think that the American West has been getting hotter lately. But as luck would have it, news consumers who want to know the facts can look them up.

Just the other day, the Associated Press moved a story from Los Angeles blaming what it called “increasingly ferocious” wildfires on “more heat, more drought, more fuel and more people in the way.” No question about three of those factors, but more heat?

The story said that Arizona had seen dramatic warming over the past 35 years, with an increase of the 10-year average temperature of 2.3 degrees Fahrenheit, compared to 1.6 degrees nationwide. But why should Arizona be singled out? It sounds like a case of picking the data to fit conventional wisdom. The story also cited a federal report that western forests were under stress from climate change, making them more vulnerable to fires.

As it happens, the National Oceanic and Atmospheric Administration has published temperature data online. For the Western United States as a whole, the data show a gradual increase since 1895 and a peak in the 1930s. But since about 2000 there’s been a decline, yes a drop in the yearly average, as seen on the right hand side of the accompanying graph. How that does fit the link between warming and bigger fires in the last few years? (hh)