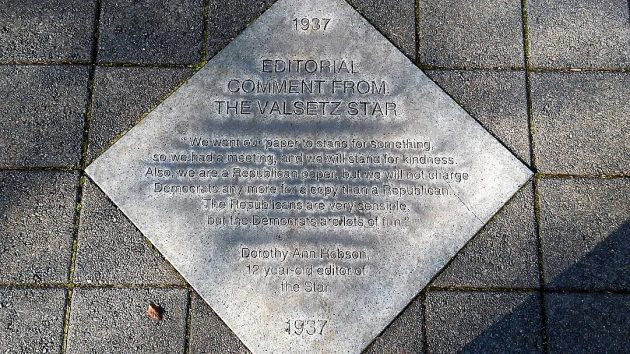 Strolling around the Capitol grounds in Salem the other day, I came across the late Dorothy Anne Hobson in the form of this plaque on the ground. She had a lot more to say back in the day, when she was a young girl, all of it straight to the point.

Young Dorothy became famous around the country, but I’m embarrassed to admit I had never heard of her before seeing her name on the Capitol mall. I’ve read about her since, notably what newspaperman and OSU instructor Finn John wrote about her in his “OffbeatOregon” column in 2013. I also sent away for the 2000 book “The Valsetz Star” by Ron Fowler, and now I’ve read some of that.

Dorothy Anne Hobson lived from 1928 until 1996. When she was 9, in 1937, living with her parents in Valsetz, she started a monthly paper for the isolated lumber company town in the Coast Range. It was written in pencil and then typed up and mimeographed in the Portland office of lumber broker Herbert Templeton, who sent it to his contacts across the country and the world. She kept it up for four years, quitting only when she started at Parrish Junior High in Salem.

The Star had everything including forecasts. The issue of January 1938 predicted: “Rain till the Fourth of July.” And national news: “We are studying current events in the fourth grade, and the country needs more houses.” International too: “In geography we are studying about France. They have many beautiful cathedrals and they owe us some money.”

Dorothy Anne had help. “Nellie Hendrickson, the Assistant Editor, thinks she will give up newspaper work — she thinks she would like the movies. She has big brown eyes and curly hair. My yes are blue, and my hair is straight. Mrs. Roosevelt wrote a book, and she was plain too. We have the book.”

By March that year, her staffing problem had solved itself: “Nellie Hendrickson, the Assistant Editor, will not give up newspaper work for awhile, as we read an article and Hollywood is full.”

Trouble in Europe and elsewhere occupied the editor. “Mrs. Ann Heydon, our post mistress, may leave for Czechoslovakia to save her country. She has four guns…”

And there was politics, sort of: “Fifty Democrats will come to Valsetz the first of June, and Mrs. Ann B. Heydon will be leading them. They all work in post offices. We are glad they are coming, but we wish they were Republicans.”

Later, the Star reported on the same big event: “Everybody contributed towards the entertainment. This is the first time we have used the word ‘contributed,’ but we will be using bigger words from now on because Mother bought the ‘Book of Knowledge’ set for us from Mrs. Shea of Portland, and she gave us a big dictionary with the set. We will pay for it later.”

And so it went, month after month, until December 1941, when Dorothy Anne shut down the Star to devote herself to junior high and never published another word. She was honored as an invited guest at the last commencement of Valsetz High School, just before the town was razed in 1984.

In her final issue she wrote: “We’ve had lots of fun in the last four years, and we hope we haven’t hurt anybody’s feelings.”

The plaque in the walkway outside the Capitol misspells her middle name and is wrong about her age in 1937. But I’m very glad I saw it there. (hh) 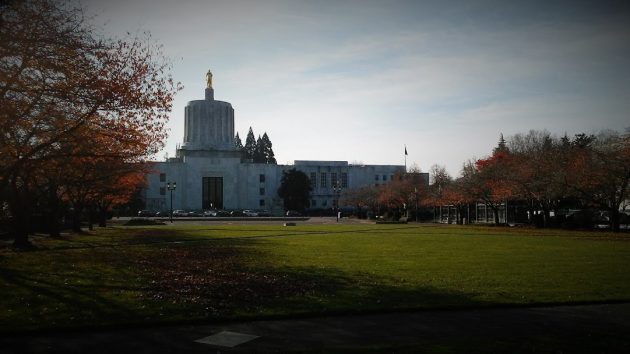 This is the araa where you’ll find walkway plaques recognizing notable people and events.