A visit from a ‘Southern Belle’

Written May 17th, 2014 by Hasso Hering
Comments: no responses. 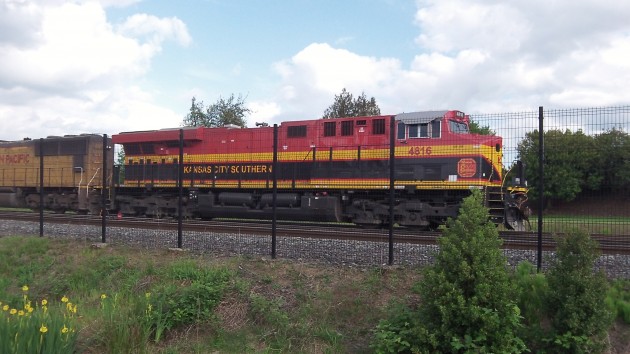 When I see a locomotive I don’t remember seeing before, I can’t resist taking its picture. So here you are: Locomotive 4816 of the Kansas City Southern Railway Co. was parked off Seventh Avenue in Albany on Friday afternoon.

What it was doing there I have no idea. Was it on loan or had it been sold to the Union Pacific? Or had it helped pull a consist — a freight train, in other words — from the Midwest or South, where the KCS operates and this engine had been photographed several times in recent months.

The photos can be found online by looking for the KCS’s locomotive roster. Last December, somebody photographed 4816 in Pittsburg, Kan., where the railroad was founded. This past March it was seen passing a grade crossing in Joplin, Mo. And last month, on April 24, somebody got an image of it pulling a freight in Newton, Miss.

From one of the online rosters, I learned that this locomotive is painted in a color scheme the railroad calls “Southern Belle.”

With its head office in Kansas City, Mo., the Kansas City Southern is the smallest and second oldest Class I railroad still operating in the United States, if Wikipedia can be believed. It was founded in 1887 and now operates in 10 central and southern states. Which leaves unanswered what No. 4816 was doing in Albany last week. (hh)