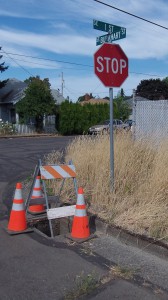 Where did the grating go?

First Avenue and Burkhart Street in east Albany is not a busy place.  A year or two ago, a small tank farm on the southeast corner was cleared away, leaving a vacant lot surrounded by a fence. The Union Pacific and a second rail line cut off Burkhart on the south, but there’s a path for people to cross both tracks from Salem Avenue on foot or on their bikes. That’s the geography, more or less. The mystery is what happened to the grating that covered a storm water catch basin at the southeast corner of the intersection.

Granted, it’s not overly intriguing as far as mysteries go. The thing didn’t fly off on its own, so somebody evidently lifted it out and carried it away. But why? No reputable scrap metal dealer would buy something that was as obviously stolen as that. A souvenir then? Does this sewer grate now hang on somebody’s wall? Not likely, considering its considerable weight.

So what’s the deal? The city operations manager, Chris Bailey, doesn’t know. She does say that the thing turned up missing and that a replacement has to be fabricated. Meanwhile, you see the barricade and cones to keep anybody from taking a wrong step and breaking a leg — yet more testimony to the dangers to the public of vandalism, and the cost. (hh)

From Wilma Albright, via Facebook: Sad that people do things like that. Guess they needed a paper weight.
From Shelly Sovern Garrett, via Facebook:  Probably somebody’s bbq grill now.
From Sam Suklis, via Facebook:  It’s very likely sitting on top of someone’s barbecue pit.
Postscript: The Albany paper reported that on Aug. 19, a Linn County deputy seized “several” storm grates at a business on Santiam Highway after confirming they had been stolen from Albany. The paper said there was “no report of a suspect,” which seems unlikely if the business followed the law and retained data on the person from whom it bought the items.
Posted in: Uncategorized