A tree comes down in Albany

Tooling around downtown Albany on a bike can sometimes take you to an interesting sight, such as the regrettable end of a big old tree.

On Saturday, at the corner of Third and Calapooia, a crew from Preferred Tree Care of Corvallis was taking down what was left of a once-towering maple. You can see the high point of the operation in the video.

One of the men told me he estimated the maple’s age to be around 150 years and its height at about 100 feet. But some time ago a big branch broke off and crashed to the street below. Where it broke off showed signs — to my untrained eye — of internal decay. So it had to go before doing any damage as it died a natural death.

As the video shows, the crew rigged a long line to the upper part of the trunk and, with a tracked vehicle on the ground, pulled as the man in the bucket made his final cut. Result: There was no chance the trunk would hit the house on the corner as it came crashing down. (hh) 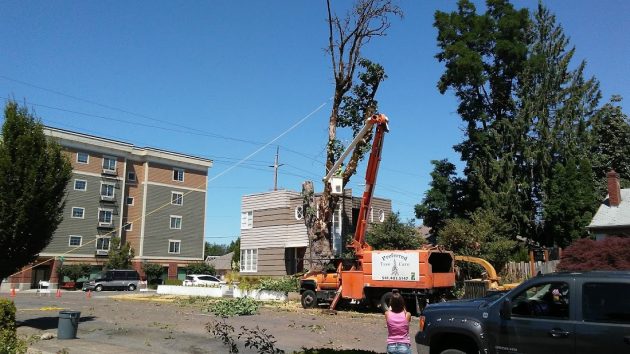 You can see the line attached to the upper part of the tree.


8 responses to “A tree comes down in Albany”