A treat every four years 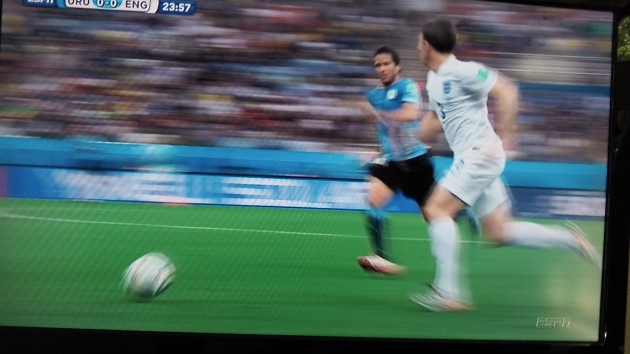 Uruguay vs. England during the first half, before Uruguay scored.

The trouble with the start of summer every four years is that it’s hard to get any work done, or much of anything else. It’s World Cup time for soccer, and cable TV customers can spend all day every day watching games that are exciting even if you don’t pull for any of the teams.

This week soccer fans had the treat of watching Chile dethrone the reigning world champion Spain with a 2-0 score. Then came a thrilling game between Colombia and Ivory Coast, also won by the side from South America. More treats were in store the rest of the week, England against Uruguay being one main attraction on Thursday.

What is that makes these matches interesting, besides the ceaseless action on the field leaving no time for annoying commercials? For one, it’s the international nature of this true world championship. In recent years it’s also been the emergence to prominence of teams from Africa, which are giving the traditional soccer powers a good run.

Also, there’s the intriguing dynamic of teammates during the regular season playing against each other because they come from different countries. Just now, Luis Suarez has scored for Uruguay against England, where he makes his living with Liverpool as one of the stars in the Premier League.

Then there’s the relative rarity of the event. The Superbowl, the NBA finals and the misnamed World Series come around every year, but after this World Cup is over, for the next one you have to wait four years, just like for the Olympics. So if you’re a fan with an expected life span of about 75 years or so and hear your first radio broadcast of a title game when you’re 11 — as I did — you’ll get to listen to or watch maybe only 15 or 16  more. That’s all the more reason to savor the experience each time. (hh)