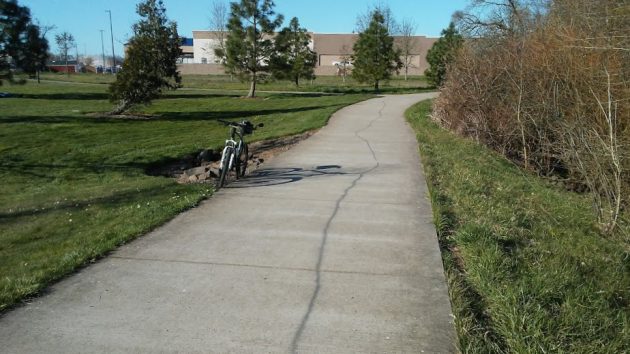 The Perwinkle Bikepath last Thursday, with Lowe’s in the background.

Albany has three paved off-street bike paths, and now and then, especially when the weather is fine, it’s fun to make a circuit around town that takes in all three.

You start at Monteith Riverpark and take the Dave Clark Path east. There’s a detour in the middle for construction, but after about a mile and a half (the last part on Water Avenue) you get to Geary Street and hang a left, and then a right on Front.

That takes you to Simpson Park and the start of the short Cox Creek Path. After less than half a mile, with the Talking Water Gardens on one side and the creek on the other, the path spits you out on Salem Avenue, which you can take back to Geary. Or you can turn around on Cox Creek Path and get back to Geary on less busy streets.

Once you’re back to Geary, you turn south, cross two railroad tracks and eventually Santiam Road, Pacific Boulevard and Ninth Avenue. The lights make it easy and safe to cross those busy highways.

Still moving south, you turn right on 12th Avenue and follow its twisting turns until, just before a locked gate to an apartment complex, there’s a narrow footpath on the right. That takes you across Periwinkle Creek on a wooden bridge, and now you’re on the Periwinkle Bikepath, Albany’s first.

You can take that south all the way to Grand Prairie Road and Park — if you want to tackle the tricky intersection of Queen Avenue and Geary. Or you can turn right on Queen, right again on quiet Oak Street and make your way north again, cross Ninth and Pacific on the signals, and take Main Street back to the river and the Clark Path. On the way you have the thrill of negotiating the Main Street roundabout.

The paved paths, starting with the Periwinkle Bikepath in 1977 and followed by the other two, came about because of the efforts of then-Parks Director Dave Clark. The riverside path named in his honor was finished after he died, only 52 years old, in 2002.

All of them are not just for people on bikes, obviously. They are “multi-use” paths. Biking on them requires looking out for walkers, especially people walking their dogs.

In a perfect world, these off-street paths would be more directly connected to each other. But except for a few side street, all the streets connecting them have designated bike lanes, which are the next best thing.

It’s unlikely that the Albany area will get more off-street bike routes any time soon. Let’s be glad for the vision and the work of Dave Clark and his crew, decades ago, that gave us the ones we have. (hh) 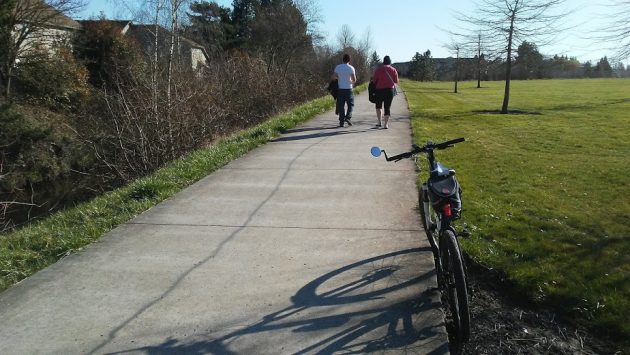 Obviously these paths are for pedestrians, too. 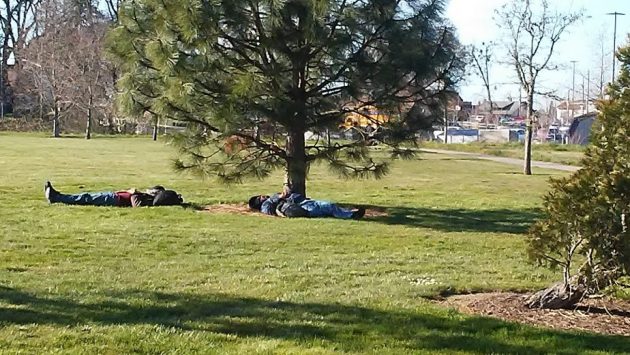 Among the sights off the Perwinkle Path: Sleepers taking a nap last Thursday afternoon.


4 responses to “A tour of Albany’s paved bike paths”