A time for Aubrey & Maturin 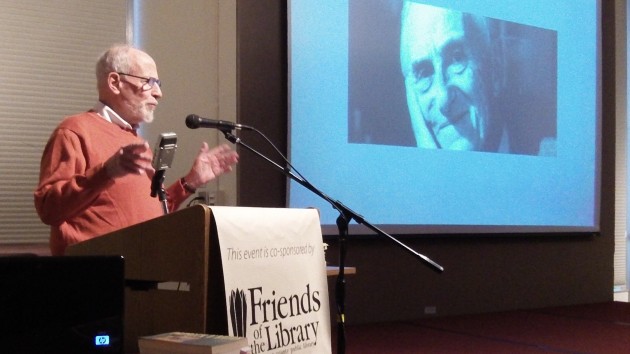 Gerald Krantz talks about Patrick O’Brian as the author’s face appears on the screen.

No time could be better spent reading than these rainy days of January, short and gloomy as they are. And there is no better story to take our minds off this entire dispiriting age than the novels that the late Patrick O’Brian created about Jack Aubrey, the British naval officer, his friend Stephen Maturin and their exploits in the wars against Napoleon Bonaparte.
On Wednesday, a capacity audience at the Corvallis Public Library had the pleasure of listening to Gerald Krantz talk about those 21 books in this month’s “Random Reviews” program of the Friends of the Library. A Marine Corps veteran and retired professor of zoology at Oregon State, Krantz did full justice to these books by O’Brian, who died in 2000 and left his last work unfinished, in mid-sentence. I have read most of the novels, and I agree with one of the New York Times reviewer quoted by Krantz that these are “the best historical novels ever written.”

The stories take place at sea and on land all over the world. The writing is superb, almost poetic, and the stories are alternately funny and sad, heroic and tragic, often suspenseful, and filled with extraordinarily vivid detail not just of naval warfare in the age of sail but all of life in the early 1800s.

For me, the stories reawakened a boyhood interest in the historic struggle against Bonaparte. When I was 8 or 9, I was staying with my grandparents in Leipzig, Germany. They handed me a dime to ride the streetcar, and I took the line way out of town to a towering stone pile, a monument to the Battle of the Nations in 1813, where the combined forces of Russia, Prussia, Austria and Sweden dealt Napoleon’s forces a decisive defeat. The diorama recreating the action in miniature impressed me no end.

The year after that battle, Bonaparte was deposed and sent to Elba. But he escaped and once again threatened Europe. That’s when O’Brian has Aubrey and Maturin being sent on a mission to the Balkans to intercept Muslim mercenaries and a shipment of gold meant to support the French tyrant. That part is fiction, and O’Brian tells the story in “The Hundred Days.”

It’s a story well worth your time. Best start at the beginning of the series, though, with “Master and Commander.” Soon enough you’ll be hooked. And you’ll also know the difference between a mizzen staysail and a flying jib. (hh)

3 responses to “A time for Aubrey & Maturin”