A taste of the buzzing to come? – Hasso Hering

A taste of the buzzing to come? 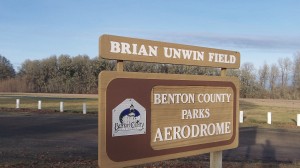 Deputies responded to this place on March 23.

A little item in the log of the Benton County Sheriff’s Office could foreshadow part of our future, a future full of drones.

It was Sunday afternoon (March 23) when someone called the sheriff’s office from the Adair County Park, where a disc golf tournament was under way. “There was worry,” the log says, “about people who were flying model airplanes at the nearby aerodrome possibly crashing and hitting individuals who were playing in the tournament.”

There’s no clue in the online summary log about what prompted those worries. The aerodrome is a few hundred yards away from the county park at Adair. Did a miniature Red Baron buzz the park? Was there a near collision between a flying machine and a Frisbee in the air? The log doesn’t say but completes its sketchy story: “Deputies spoke with the remote-control-airplane-club president who said no one crashed that day. Everyone appeared to be flying safely and not near the disc golf course.”

So far so good. Now look ahead to a time when Amazon uses drones to deliver merchandise to people up and down your street, while the pizza stores have also learned to cut out their drivers by sending you a large pepperoni-and-pineapple via the air. By that time, the post office might have adopted that delivery method as well. And if there are any newspapers left, the weekly paper copy might be plopped on your porch — or maybe your roof — from 50 feet up. Imagine the din, if not the likelihood of midair collisions that send both pepperoni, newsprint and mail into some outdoor wedding party on a fine June day.

Can’t happen, you say? Probably not, as printed news will be history, weddings will be even rarer than now, and President Michelle Obama (Hillary’s successor) will have banned pizza as bad for your weight. (hh)

One response to “A taste of the buzzing to come?”