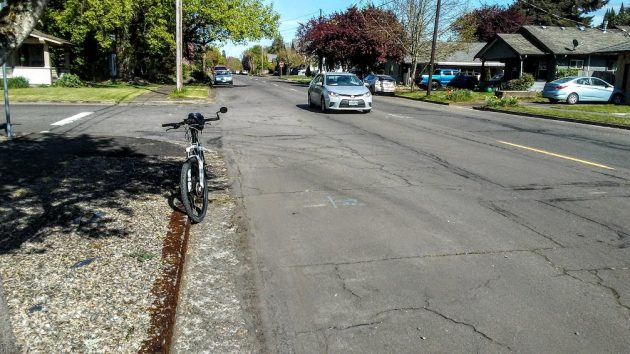 This is part of the stretch of Ninth Avenue to be rebuilt this summer.

Some time this spring or summer, a contractor for the city will start tearing up the west end of Ninth Avenue in Albany in order to rebuild it. Assuming, that is, that the caronavirus outbreak doesn’t change the plans.

On April 8 the city council awarded the contract to K&E Excavating of Salem, whose bid of $1,387,485 was the lowest of four.

The contract calls for five blocks of Ninth, about one-third of a mile from Broadway Street to Elm, to be rebuilt. That includes curbs, sidewalk repairs, storm drains, and landscaping. It also includes replacing a deteriorated water line with a bigger one. The street, water line and storm drains are to be completed by Sept. 4, and street trees and landscaping by Nov. 13.

Why reconstruct that section of Ninth, which to the untrained eyes of passing motorists and cyclists looks to be in better shape than the rest of Ninth between Elm and Ellsworth, and certainly better than many of the numbered streets east of Lyon?

City Engineer Staci Belcastro said Ninth was built in 1937 and a storm drain pipe was installed down the middle in the 1980s.

“Over the years, this section of Ninth Avenue has seen multiple overlays,” she wrote in an email, “but it has reached a point where both the asphalt and road base is failing.”

“Following discussions on the condition and maintenance of Albany’s streets, Council set a goal in March 2017 to maintain all arterial and collector streets to a fair or better condition (minimum PCI of 60). Ninth Avenue, with a PCI of 39, is in serious or very poor condition.”

If you want more details, Belcastro points out that information on Albany’s streets and past staff presentations to the council can be found at https ://www.cityofalbany.net/streets.

As for the rest of Ninth, the section west of Ellsworth which is breaking up in some places, a few months ago Belcastro suggested that it be included in a street reconstruction bond measure to be put to the voters. But the council did not follow up on that idea. (hh)


10 responses to “A street project in West Albany: Ninth”