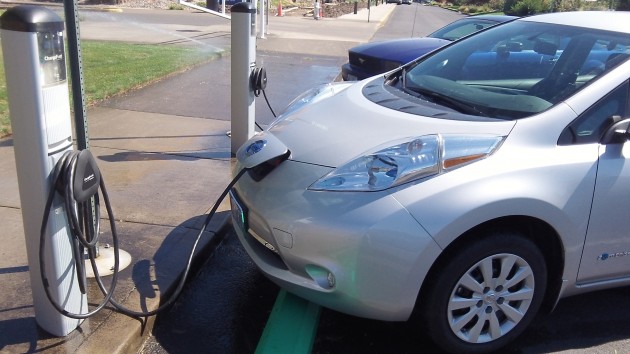 Charging his batteries at LBCC last week, the owner of this car need not worry about a fuel tax.

The League of Oregon Cities would like the 2015 legislature to raise fuel taxes and vehicle licensing fees to help pay for street and road repairs. This would not be wise because some of that extra money would be wasted. Instead, let the cities look to local solutions, as Multnomah and Washington counties and 14 cities have already done.

The administrations of Governor Kitzhaber and his predecessor spent nearly $200 million, most of it for consultants, on planning for a new Columbia River bridge before the project was abandoned for the time being. A couple of sessions ago the legislature authorized hundreds of millions of highway projects favored by influential members regardless of statewide needs, hardly a powerful inducement for raising state taxes.

Cities are allocated only 20 percent of the state highway fund. So rather than calling for more state revenue, cities would be better off raising money for their own street maintenance and repairs. Eugene and 13 other cities have done just that. Eugene is the largest of them and levies a 5 cent local gas tax. The others, as small as Veneta and as big as Tigard, collect local fuel taxes ranging from 1 to 3 cents a gallon.

Over the last 30 years or so, Albany has considered doing the same. Once the voters said no, and at other times the idea was shot down before it got to the ballot. Now the price of gas hovers around $3.75 a gallon, having come down from nearly $4 since the spring. The idea of a 3-cent local gas tax — or even 5 cents — would not be nearly as shocking as it seemed some years ago when fuel cost a dollar fifty or so.

The need for street repairs is greatest at the city level. ODOT does a good job maintaining state highways and Interstate 5 with the resources it has. Among counties, Linn County keeps roads in excellent shape, and its road fund is still plump enough to serve on occasion as a kind of county investment bank. It’s city streets in some older parts of Albany that feel like rumble strips. And city voters might accept a modest local fuel tax when they see that it results in better pavement on their own streets. (hh)


11 responses to “A small local tax for street repairs”