A slow train to China? Not really, but … 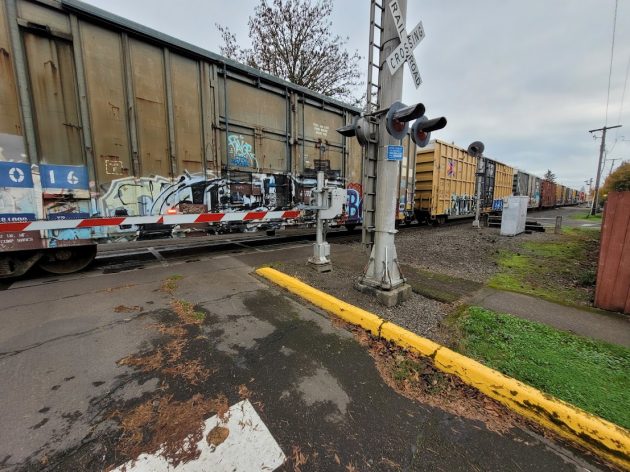 A Portland and Western freight as seen from the Third Avenue crossing in Albany on Nov. 13.

When you’re standing on Albany’s Third Avenue watching a slow freight train go by, as I did on Saturday, you may not realize you’re looking at a tiny part of a huge business enterprise that spans the globe.

If you’re up to is, you can watch the train stop and take off again in the video below.

So what about the rest of the story?

The Willamette & Pacific (originally based in Albany) and the Portland & Western, known as shortline railroads, were started in 1993 to take over many local tracks of the Southern Pacific in western Oregon. They were subsidiaries of the Genesee & Wyoming Railroad, a holding company based in Connecticut.

Since then Genesee & Wyoming kept buying local railroads in this country and abroad.

By 2019, it had acquired or leased 119 freight railroads in the United States, Australia, the United Kingdom and continental Europe. One of its operations in Australia ran the 1,400-mile rail line from Tarcoola to Darwin, not exactly what’s you’d call a short line.

In addition, the company ran all kinds of other transportation facilities around the world, including a rail ferry service between the U.S. and Mexico.

Then, at the end of 2019, Genesee & Wyoming completed the sale of itself to affiliates of two international asset management companies named Brookfield Infrastructure and GIC.

It’s hard to know where Brookfield is based. Its website says it has corporate offices in Toronto, New York, London, Sydney, Sao Paulo, Dubai, Mumbai, and Shanghai. The company says it operates assets in the fields of utilities, transport, energy, and data infrastructure in North and South America as well as Pacific Asia and Europe.

GIC is a worldwide company too. It was founded in 1981 to manage the foreign reserves of Singapore, where its headquarters are. The firm says it has investments in more than 40 countries.

I didn’t know any of this, obviously. I had not even realized that Genesee & Wyoming had been sold. I learned about it when I went online to see what else there might be to say about a local fright train slowly rolling to a stop and then starting again while I and others watched from an Albany street. (hh)