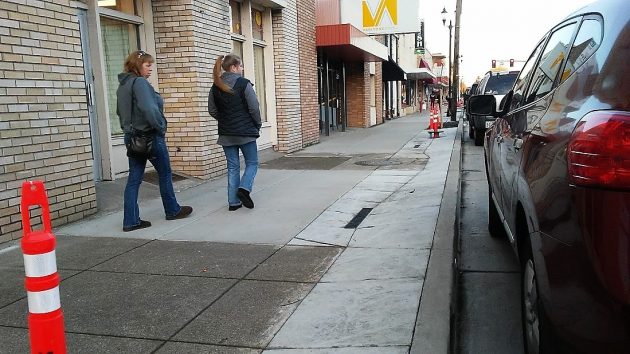 The rebuilt sidewalk in the 200 block of on Albany’s Second Avenue S.W. has an unusual dip.

Monday was kind of a slow day, which may explain why I first noticed and then wondered about the shape of the new sidewalk on Second Avenue downtown.

The walk was rebuilt as part of the city’s $8.5 million downtown streetscape project. What’s unusual about this section, in the 200 block just west of Ellsworth, is that from the curb toward the buildings, the pavement first dips down and then rises again in the form of a very shallow V.

It’s the result, I learned, of fixing old streets in the light of current rules and standards without rebuilding the whole thing from scratch.

“We are working around existing conditions and following the Americans with Disabilities Act (ADA) regulations,” Lori Schumacher told me. She’s in the engineering section of Albany Public Works and helped design the streetscape project.

She provided a detailed explanation, all based on the need to let the street drain properly after the reconstruction, meet the ADA requirement that sidewalks have no more than a 2 percent “cross slope,” and get a standard curb height of 6 inches. (The old curb was lower.)

“Knowing that we couldn’t install the sidewalk to slope toward the buildings, we installed the 8 foot sidewalks at 1.5 percent slope toward the street in accordance with ADA standards and created a valley gutter in the 4-foot landscape strip next to the street with drains to capture any standing water. This design was the best way to accommodate ADA standards and drainage while working around existing conditions.”

So now you know. In the photo, the pedestrians seem to be wondering about this too. More likely, though, they were just puzzled why there was a guy taking a photo of the ground. (hh)

2 responses to “A sidewalk anomaly explained”